3 Common Cryptocurrency Scams and How to Avoid Them

3 Common Cryptocurrency Scams and How to Avoid Them

A report by the Federal Trade Commission (FTC) has revealed that in a span of 8 months, people have lost over $80 million to cryptocurrency investment scams. Compared to last year, the reported losses have increased nearly 1000%. The numbers, while extremely worrying, are not particularly surprising. The cryptocurrency buzz over the last couple of years has attracted a lot of inexperienced investors, and cybercriminals are quick to take advantage of them. 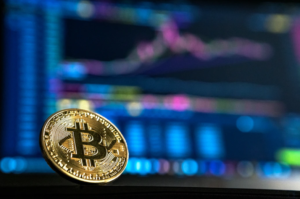 Investing in anything involves risks but cryptocurrency investment poses a very particular threat to many new investors, cryptocurrency scams. Cryptocurrency is now more popular than ever, which means the market is attracting a lot of beginner investors looking to make some additional profit. But unfortunately, these people are often exploited by scammers looking to make some easy money. And it appears that many of them are successful, considering that in just the US alone, victims have lost more than $80 million since October 2020.

Scammers are particularly good at invading spaces where cryptocurrency enthusiasts come together to talk about their interest in cryptocurrency and share tips/recommendations. They blend in and offer a “helping hand” to those looking for information. Only their kind of help involves directing unsuspecting users to scams. They promise huge profits for those willing to invest in what they recommend, and many naive users fall for this.

According to the FTC, younger people, particularly between 20 and 49 years old, were over five times more likely to report losing money to cryptocurrency scams. And people in their 20s and 30s have reportedly lost far more money in investment scams than any other type of fraud. The report also details that while people aged 50 and older were far less likely to report losing money in crypto scams, their individual losses were higher, with a median reported loss of $3,250.

If you are interested in investing in cryptocurrency, we highly recommend you familiarize yourself with some of the more common cryptocurrency scams so that you can avoid them in the future.

Social media is a great way for malicious actors to promote their scams, and they certainly know it. Websites like Twitter, Facebook, Instagram, YouTube, and even TikTok are full of fake profiles promoting crypto scams and inviting users to visit certain websites and reach out to individuals who would supposedly help make an easy profit. In more sophisticated scams, the profiles of the individuals promoting these scams would look at least somewhat legitimate, with professional-looking profile photos, links in descriptions to various websites, and other content that’s been posted/shared in the past. In more obvious cases, the profiles would be empty. 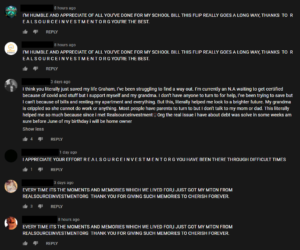 There are different variations of this scam but what all of these comments have in common is claims an individual and/or a company has helped them invest correctly and get significant returns. This may be an effective way to promote scammers because many inexperienced investors watch videos about investing in cryptocurrency for beginners. For users who are more susceptible, these comments and their recommendations of particular people or companies may seem legitimate. Comments like the ones displayed in the above image often have tens of replies, with other users supporting the claims and providing a way for users to contact the person/company they’re talking about. Once someone falls for this, they get tangled up in an elaborate scheme where scammers convince them to use scam websites and “invest” large sums of money. Users who are lured in by promises of huge profit even end up investing their life savings only to later realize they have fallen into scammers’ hands.

If you are a beginner in investing and know little about cryptocurrency, be very skeptical of individuals on social media recommending you something or someone specific. This is especially important when partaking in large communities, such as the cryptocurrency subreddits on Reddit or a similar site. While there certainly is a lot of useful information and resources in those forums, they’re also very convenient for scammers to look for victims. It’s best to do your own research and closely look into any service you plan to use.

Crypto scammers love to impersonate high-profile individuals and companies on social media to promote giveaway scams. If you follow the Twitter accounts of people like Elon Musk, you will have noticed the occasional comment to a post that claims you can participate in a crypto giveaway. According to these fake giveaways, if you send an amount of cryptocurrency (e.g. Bitcoin) to the shown wallet address, you will get double in return.

While these Bitcoin giveaway scams have been around for a while now, people still evidently fall for them as they would not be so common otherwise. According to the report by the FTC, victims have reportedly sent more than $2 million worth of cryptocurrency to Elon Musk impersonators in the past six months.

It should be mentioned that it’s very easy to spot an impersonator account on social media, particularly on a platform like Twitter. Let’s take an Elon Musk impersonator account as an example. These fake profiles usually comment on the real Elon Musk tweets to make their posts seem more real. They will have the same name and profile picture but the Twitter handle will obviously be different. And unless scammers are able to hijack a verified account, the blue checkmark will also not be present. Furthermore, if users checked the profile of the user posting the crypto giveaway tweet, it would be obvious it’s not actually Elon Musk. His legitimate account has more than 57 million followers at the time of writing. If a profile that claims to belong to Elon Musk has a hundred, it’s obviously not real.

However, there have been cases in the past where giveaway scams were more sophisticated. In particular, we mean the instance when hackers were able to hijack legitimate Twitter accounts that belong to high-profile individuals and companies. Once they gained access to these accounts, they tweeted that they will send double the amount of cryptocurrency they receive. Even though some thousands of people fell for this scam, the malicious parties responsible were not able to make much profit and were ultimately caught soon after. Among the hijacked accounts were those belonging to Elon Musk, Apple, Barack Obama, Bill Gates, Kim Kardashian, Kanye West, Coinbase, CoinDesk, and Uber. 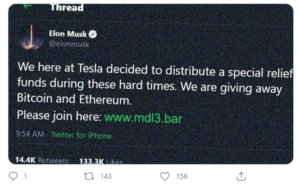 99.9% of the time, cryptocurrency giveaways are fake. If you ever come across a random “Elon Musk” Twitter account inviting you to send cryptocurrency to get double in return, resist the temptation as you’ll only end up losing your money. And there is very little chance you would be able to get it back.

Romance scammers have been taking advantage of vulnerable individuals for decades but they have recently started inviting their victims to invest in cryptocurrency instead of merely asking for money. According to the FTC, 20% of losses reported by victims of romance scams since October 2020 were sent in cryptocurrency. Many of the victims believed they were investing.

Romance scams involve predators approaching vulnerable individuals on social media and forming a relationship with them. Once the victim starts feeling attached and enough time has passed, the scammer on the other end will start asking for money. In a common romance scam scenario, the scammer claims to be stuck in a war-ridden country with no means to leave and requests money for a visa, plane ticket, rent, etc. Victims, who already feel some kind of attachment to them, end up sending thousands of dollars, thinking they will help their long-distance partners get out of dangerous situations. This can go on for months until the victim realizes what’s going on or the scammer moves on to another victim.

While the classic romance scams are still quite prominent, malicious actors have also started tricking their victims into investing in fake cryptocurrency schemes. After a few months of talking on social media, the scammers would start talking about cryptocurrency and how easy it is to make money by investing in it. They would recommend victims use a particular website or contact a specific individual in order to begin investing in cryptocurrency. Thinking they could double or even triple the amount invested, victims would end up giving away thousands of dollars to scammers.

To protect yourself from romance scams, be wary of unknown individuals approaching you on social media and trying to form romantic relationships with you. If the person avoids voice/video calls, claims to be unable to meet you in person, and requests money, it’s more than likely that you’re dealing with a romance scammer. You can also reverse image search the profile picture, as they’re usually taken from the Internet.