What is Critical Chrome Update

Critical Chrome Update refers to a fake notification claiming that Google Chrome needs to be updated. There’s also an identical scam promoting fake Mozilla Firefox updates but this article will focus on the Google Chrome one. The way the scam works is pretty simple. Users click on a legitimate looking ad and are redirected to a website that shows a notification claiming an urgent Google Chrome update is necessary. Users may get different messages, some may simply say that an update is needed, while others will threaten file loss, leak of sensitive information and browser errors. If users agree to install the provided “update”, they would essentially be downloading malware. The malware that is downloaded is the Kovter trojan. The trojan is a dangerous piece of malware that can grant malicious actors access to the computer. 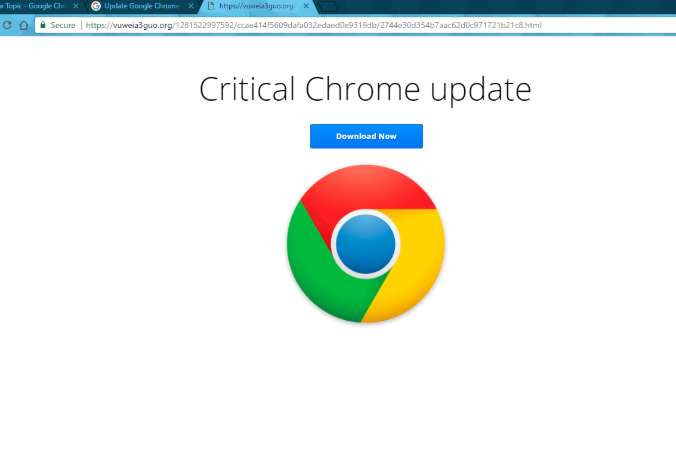 Critical Chrome Update is a common social engineering attack and can easily be avoided by not clicking on ads on questionable websites, as well as not downloading “updates” from non-official sources.

If users remember getting this kind of notification and downloaded the supposed “update”, they need to scan their computers with anti-virus software immediately.

When users click on a malicious ad, they are redirected to a site that claims users need to install a critical Chrome update. For someone unaware of these social engineering attacks, the alert about an update may seem legitimate and they would not hesitate to download it, especially if the alert threatens file or information deletion if the update is not installed.

We should mention that legitimate updates are never pushed this way. Browser will never redirect users to some website to tell them they need to install an update. In most cases, browser updates are installed automatically. If they require a manual update, users will be directed to the browser’s official website where they can safely download the update.

If users are redirected to the alert and press “Update”, it drops a ZIP file onto the computer with a runme.js file inside. If the file is executed, the Kovter virus will be downloaded onto the computer.
The Kovter trojan is a known piece of malware that has a wide range of functions. It has been known to spread ransomware, allow other malware to install, and make revenue from click fraud. The malware does not drop any files onto the system, which allows it to avoid detection for longer.

It’s also possible that the trojan could allow the malicious attackers to gain access to the users’ computers. This could mean cyber crooks can steal files and information on the computer, access accounts, etc.

The malware does not exhibit any particularly noticeable symptoms, although the computer may be a bit sluggish. This is why having anti-virus software installed is necessary. A trustworthy security program would have warned users about the Critical Chrome Update alert being malicious, or at least detected the malware before it could do any damage.

For future reference, users should remember that legitimate updates are never pushed via ads. And browsers usually update automatically, without any user interaction. Notifications like Critical Chrome Update can be ignored. Using ad-blocker can often prevent these ads from even appearing.

If users have downloaded the supposed “update”, they need to scan their computers with anti-malware software immediately. The Kovter trojan is a serious malware infection that can lead to a lot of damage to the computer. It’s also a difficult infection to get rid of manually so we do not recommend users attempt it. Instead, they should get anti-malware software to take care of it.