hkcmd.exe is a process installed by Intel 810 and 815 chipset graphic drivers. In other words, while not an essential Windows process, it’s completely legitimate and safe. It appears in Task Manager, which is where you and many others users likely noticed it. It’s normal and even advised to be concerned about unfamiliar processes appearing in the Task Manager, but this one is nothing to worry about. It will auto-launch every time you start your computer so if you end the process it will launch again upon startup. 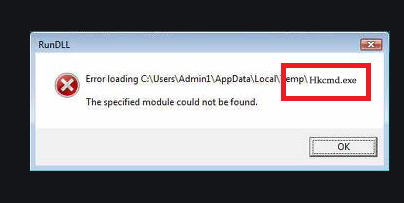 hkcmd.exe is referred to as graphics hotkey interceptor, and is an Intel-signed process. The process should only appear in earlier versions of Windows, ending with Windows 7. In later versions, the same process appears as Igfxhk.exe. The process is essentially there to allow you to use a shortcut to access Intel’s Graphics and Media Control Panel. If the process is disabled, the shortcut Ctrl + Alt + F12 will not work.

hkcmd.exe should not be causing you any issues so there is no reason for you to remove it. However, if you do want to disable it, it won’t be enough to just end the process in Task Manager as it will re-launch when you restart your computer. Instead, you should open Intel’s Graphics and Media Control Panel (Ctrl + Alt + F12) -> Basic Mode -> Options and Support. Uncheck the box that says Hot Key Functionality. This should disable hkcmd.exe.

When users encounter unfamiliar processes running in their Task Managers, they become concerned that it could be malware. hkcmd.exe is not malware, but malware could be disguising itself as hkcmd.exe. Malware disguising itself as a legitimate file/process is not uncommon as it allows to escape notice for a longer time. When users look into the process, they are reassured that it’s safe by reports such as this one, and they allow the process to keep running, not realizing that it’s malware. To ensure that the hkcmd.exe process you see in Task Manager is legitimate, we suggest you scan your computer with anti-malware software. Any reliable anti-malware should be able to detect the infection if it’s present on the computer.