Uncheckit may seem like a useful tool judging from its name. Unfortunately, the application is the exact opposite of what you may think. Instead of blocking the adverts that appear in your browsers, it inserts commercial data into all sites that you visit. The ad-supported program does not differ from other adware like RightCoupon, SaveNShop, RealDeal, LuckyCoupon and similar. Uncheckit is based on JustPlugIt engine which is often used to create unwanted applications. It gets distributed through freeware and shareware bundles. It is very likely that you did not even notice installing it at all. There is no reason why you would not want to delete Uncheckit from your PC. 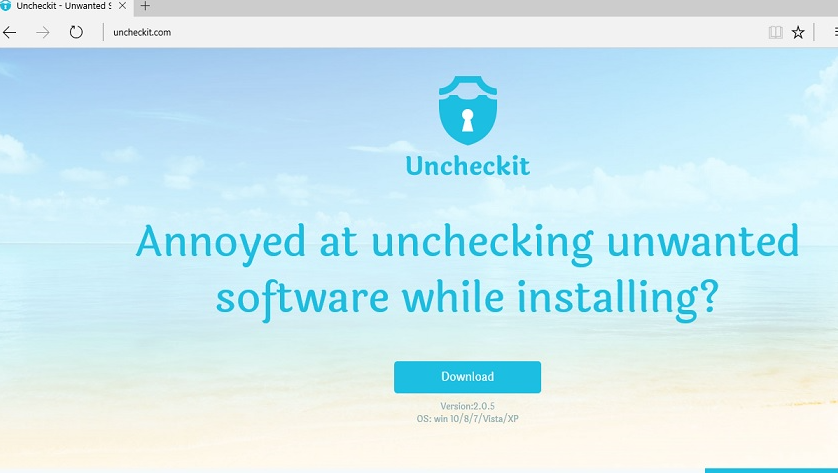 As it has already been mentioned, Uncheckit travels bundled with free third party software. It usually makes use of Amonetize, InstallRex and Vittalia installers. The adware may be not the only unwanted program that you have acquired while installing the freeware. You may have Trojans, potentially unwanted applications or other infections on your PC. That is why it is important to always choose reliable sources to download software from and be especially attentive during its installation. Otherwise you will have to deal with various problems caused by these unnecessary applications.

Uncheckit will flood you with all kinds of commercials. You will see banners, hyperlinks, pop-ups, interstitial ads and more. We urge you to stay away from this data as there is no way to know whether or not it is safe. In fact, it is more than likely that you will encounter fake adverts on a daily basis. Do not click on them unless you want to unwittingly infect your computer with malware or additional adware. The ads may also lead you to fake surveys or lotteries that are aimed at getting your personal details. Make sure you do not get tricked by them and terminate Uncheckit as soon as you can.

How to remove Uncheckit from my PC?

Since the adware is not malicious, it is possible to uninstall Uncheckit manually via Control Panel. Instructions are provided below in case you need them. However, if you think that there may be other suspicious programs on your computer, you may want to use a malware removal tool instead. Download and install the anti-malware utility. It will scan your system and detect all potentially harmful applications. You will then be able to eliminate Uncheckit along with them. The security tool will also safeguard your PC in the future by shielding it from various online attacks.