Save yourself email scam – How to avoid it

Save yourself email scam – How to avoid it

What is Save yourself email scam

Save yourself email scam is one of those scam emails that threaten to expose videos of you unless you agree to pay money. They’re often called sextortion emails because they threaten to expose sex-related videos of users if a payment is not made. These emails are scams but it’s understandable if they are convincing to people who have not encountered them before. Before we proceed, it’s important to note that nothing written in the email is true, the scammers have nothing on you, and you can safely ignore the email. 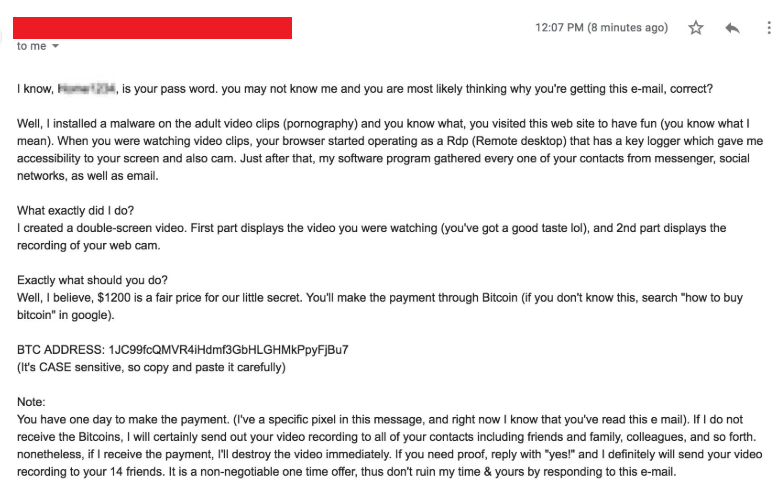 Such emails claim to have installed a trojan on an adult website, which was installed on your computer when you visited said website. Supposedly, the trojan accessed all the information on your computer and turned on the webcam when you were browsing adult pages. The webcam supposedly took a video of you “satisfying yourself” as the email put it, and the video will be sent to all contacts stolen from the device. This particular scam asks for $900 in Bitcoin, but most scams ask for more or less the same amount.

One thing about this scam that might alarm users is a password included in the email. The password is usually something users have used before, making the scam seem legitimate. However, there is an easy explanation on why scammers have that password, and it’s not because they stole information from your computer. The password, along with your email address, was likely part of a past data breach, which exposed your login credentials. If the exposed password is something you still use, change it immediately and never use it again as it’s been compromised.

In order to make scam emails more convincing, scammers started including passwords. When users notice a familiar password, they may become convinced that the email is legitimate, even if they were skeptical initially. Because how else could their password be known to others if not because of a malware infection? In reality, scammers have your password not because your computer is infected but because a service you signed up for was unable to protect your information. In other words, it’s all because of a data breach. And data breaches are so common now that there are no doubts your data was leaked at least once.

Scammers and malware developers/distributors purchase entire databases with emails and passwords and then use them for scams, breaking into accounts, etc. If you do not reuse you passwords, you can pinpoint exactly which service leaked your data. But chances are it’s an old password you no longer use.

Is there actual malware installed on your computer?

Such emails follow a certain pattern so if you’ve seen one, you’ve seen them all. The scam claims that your computer is infected with malware which not only stole your information but also took a video of you watching adult videos. The email threatens to send the video to your contacts unless you pay $900. Scammers also claim to have removed any traces of the malware so that you are unable to check with anti-malware.

In reality, if there is malware on your computer, it has nothing to do with the email. Such emails are just a ploy to extort money out of vulnerable users. There are many similar extortion emails, from sextortion to bombing and assassination threats. Scammers can get pretty creative, one bomb scam email even caused major panic last year. Familiarize yourself with such scams emails so that you can easily identify and get rid of them in the future.

Do you need to do anything?

If the Save yourself email scam has landed in your inbox, you don’t need to do anything besides deleting the email. There is no malware on your computer, nor does the scammer have a video of you. However, like we mentioned before, if the password in the email matches one you use currently, change it immediately. Also keep in mind that passwords should never be reused. You should also check your email with HaveIBeenPwned to find out which data breach leaked your email and password.