Tumbler is a popular blogging and social networking website that allows users to post various content and follow other users’ blogs. As you may already know, the more popular a service is, the more likely its name is to be used by cyber criminals. There are different scams and malicious programs that target Tumbr user accounts aiming to steal personal data or infect the computer. All of these threats are referred to as Tumblr virus. In this article, we will describe different types of Tumblr virus and provide you with tips on how to avoid it in the future and how to get rid of Tumblr virus if you have already been affected by it. 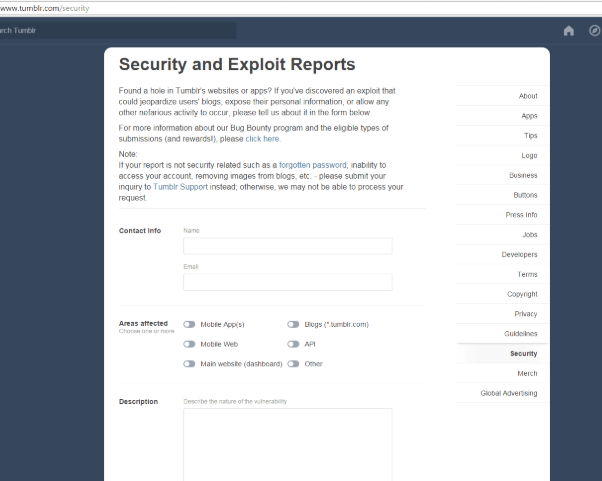 Here are some of the different ways that cyber crooks misuse Tumblr name to carry out their malign actions:

Tumblr reblogging scam targets individual accounts as well as corporate ones. It uses chain letter tactics by presenting users with bogus warning messages like “Your account will be reactivated if you do not reblog”or “Your account will be deleted if you do not reblog this” and similar. The message is usually sent via email. The scam itself reroutes victims to random pages that are disguised as donation sites or advertisements that are actually used to infect target computers with potentially unwanted apps, adware, or even malware.

Fake Tumblr accounts are used by cyber crooks who pretend to be real users. These accounts usually use random names and they do not have an avatar. The purpose of this attack (also called sock-puppet attack) is to trick users into following fake accounts. Once those accounts accumulate enough followers, they post inappropriate content (gore images, etc.) and content with embedded corrupted links. Needless to say, this is not something you want to see on your page. If you notice suspicious accounts trying to follow you on Tumblr, we advise not to follow them back.

Bogus Tumblr pop-ups or other types of ads may be posted by various accounts. These accounts may look trustworthy as they usually have avatars and appear to be legitimate in general. However, clicking on one of the pop-up messages leads to sponsored pages that often include corrupted links that supposedly lead to software updates, various surveys and tests, and more. We urge you not to click on any unknown content unless you are absolutely sure that it can be trusted.

One of the main goal of cyber criminals is to obtain personal user information. This information (including email address and other account details) can be gathered through different vulnerabilities or bugs in the platform. The collected details can be used in other scams.

A relatively recent incident involving Tumblr revealed that due to a security vulnerability in the iOS app, private information such as users’ passwords, email addresses, blog names, and IP addresses were stolen. There is no way know how many users have been affected, however, once the security bug has been discovered, Tumblr team released a “very important security update” to fix the problem.

Another type of scam involves spam emails and also aims at illegally acquiring personal details. In this scam, the user receives an email notification claiming that their account credentials have been stolen or that pornographic or disturbing photos of the user have been found. Hackers then threaten to release that information or the photos unless the user pays them a certain amount of money. More often than not, the scammers only have one of your passwords or nothing at all and they are using scare tactics to make easy money. There is no reason to believe their claims or waste your money on them.

In addition to PC threats, there have been reports of malware on mobile devices. It sents out bogus messages to the people in the contact list. Some of these messages claim that the recipient’s account has been hacked. If your blog appears normal on your computer, but not on your smartphone, it is a sure sign of your device having malware and not of your account getting hacked.

As you may have noticed, one of the main methods used to distribute Trojans and malware is through spam emails with corrupted links or attachments. That is why it is extremely important to pay close attention to the emails that you receive. If an email goes into your spam inbox, it is better to leave it there without opening. If you receive a message in your regular inbox, make sure that you can trust it before interacting with it in any way. Do not click on suspicious links and do not download any unknown attachments. The same advice goes for messages received on other platforms like Facebook or Instagram. It is also a good idea to always keep your anti-malware up-to-date, so that it can protect you from various intruders.

Other ways of Tumblr virus distribution include fake pop-ups and links, redirects to unsafe domains, and software bundles. As far as making sure that your account does not get hacker, we advise that you create a complex password and that you do not use the same password for different accounts.

No matter which version of the parasite has affected your system, you have to terminate Tumblr virus as soon as you can. This can be done with the help of a reliable anti-malware utility. The anti-malware provided on our site can assist you in Tumblr virus removal and overall system cleanup. The utility will perform a full scan and detect all elements of the infection as well as other unwanted items that may be present. It will eliminate Tumblr virus with other found issues without any difficulty, so that you can go back to using your account and your device without any worries.