Wup.exe is an executable file that is part of a cryptocurrency miner. It a kind of trojan that will use your computer’s resources to mine for cryptocurrency. The malware could also spy on you and steal your personal information. Fortunately, it’s a very noticeable infection and will exhibit pretty obvious symptoms. Your computer will start acting sluggishly, programs will crash and launch slowly, and the Wup.exe process will appear in your Task Manager. Generally, when your computer is suddenly acting slow, the first thing you should do is check the Task Manager. If you notice a process using a lot of your computer’s CPU, it’s probably responsible for your computer acting slow. In this case, you will notice that Wup.exe is using more than 60-70% of CPU, which is an immediate giveaway that something is wrong. Legitimate processes very rarely use such large amounts of your computer’s resources. 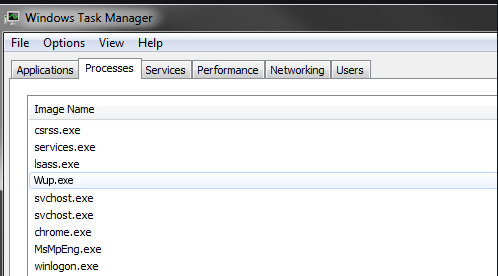 A cryptominer is not something you can just remove manually by yourself, unless you have extensive knowledge about such things. You will need to use anti-malware software to remove Wup.exe form your computer, and the sooner you do it the better. While the infection should not harm your computer, it’s using its resources to mine for cryptocurrency, and could potentially steal your data.

Why is your computer infected with Wup.exe?

Most infections can enter computers because users do not have good online habits. If you tend to open unsolicited email attachments, engage with clearly malicious ads, click on random links, and/or download content from unreliable sources, it’s no surprise that your computer is infected with a trojan.

Since malware is often attached to emails, be careful about which attachments you open. Malicious emails are purposely made to appear somewhat legitimate, and senders often pretend to be banks, post offices, famous companies, etc. By claiming that the attached file is an important document related to your money, some kind of delivery, etc., crooks pressure users to open the attachments. However, most malicious emails will have certain signs pointing to them not being safe. The emails are usually full of grammar mistakes, are sent from random email addresses, and put strong pressure on the receiver to open the attachment. Even if you do not notice anything weird, we recommend you scan the attached file with anti-malware software or VirusTotal before opening it to make sure it’s safe.

If you pirate TV shows, films, software and other content, you have an increased risk of infecting your computer with something. Torrent websites are crawling with malware disguised as some popular episode of a TV show, so we do not recommend downloading copyrighted content for free.

Finally, it’s important that you regularly update your Windows and programs. Malware can use vulnerabilities on your system to get in, and updates often patch said vulnerabilities. If you can’t be bothered to update manually, enable automatic updates.

Wup.exe is part of a cryptocurrency miner, which is a kind of infection that uses your computer’s resources to mine. As a result, the computer is negatively affected. It starts acting slow, programs take ages to launch and when they do they crash, etc. Wup.exe actually appears in your computer’s Task Manager so you can easily check whether you have this infection. The process will appear near the top and will be using more than 60-70% of your CPU. It’s not normal for programs to use so much so it immediately catches one’s attention.

Mining doesn’t actually harm the computer that much, and everything should go back to normal once the infection is gone. However, your CPU’s lifespan may be shortened, as it’s not designed to run at such high temperatures for a long period of time. The trojan may also be able to spy on you and steal your personal information.

You will need to use anti-malware to delete Wup.exe from your computer. If you try to uninstall Wup.exe manually, you might end up doing more damage or leave something behind. Your computer’s weird behaviour should stop once the infection is gone.