Why you need to remove Ashampoo WinOptimizer

Why you need to remove Ashampoo WinOptimizer

What is Ashampoo WinOptimizer

Ashampoo WinOptimizer refers to a system optimization program WinOptimizer developed by Ashampoo. System optimizers are programs that try to improve the computer’s performance but are rarely of any actual use to users. This particular system optimizer is classified as a potentially unwanted program (PUP) due to its questionable features and tendency to exaggerate scan results to encourage users to buy the full program. Exaggerating scan results is a tactic used by many PUP system optimizers. They claim that the computer has hundreds, sometimes even thousands of issues, and offer to fix them if users buy the full version of the program. WinOptimizer seems to purposely want to alarm users about the state of their computer so they would buy it for $30. 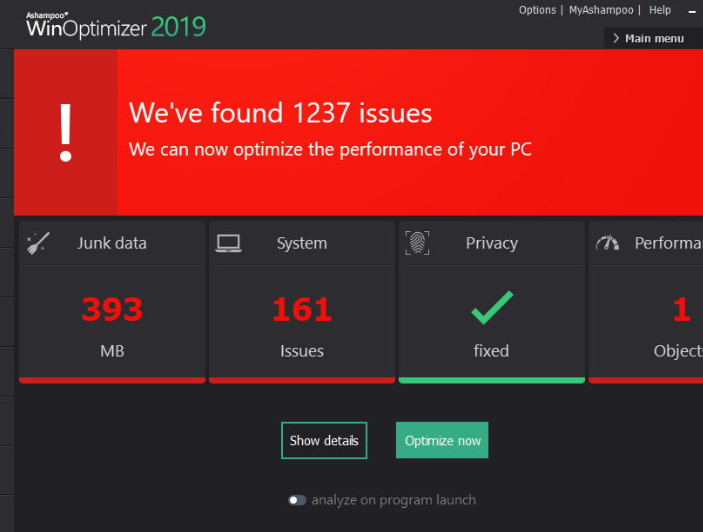 Using system optimizers is usually not recommended, especially paid ones. Most features they offer already come with Windows so there is no need to install an additional program. They also rarely actually speed up your computer, despite claiming otherwise. They could also end up causing actual damage but we will discuss this further on. We don’t recommend buying the program, and its free version won’t really do anything. Since the majority of the features it provides come with Windows anyway, consider whether you actually need the program. If you do not, remove Ashampoo WinOptimizer without hesitation.

Should you remove Ashampoo WinOptimizer

System optimizers are a debatable topic among users, some swear by such programs, while others believe them to be completely useless. The way they are advertised makes them seem like they will greatly improve the computer’s performance by deleting junk files, cleaning the cache and the registry, etc. However, the things system optimizers claim slow down your device don’t actually have any noticeable effect, so cleaning junk files won’t actually do anything.

We should mention that the program is not harmful, nor is it some kind of virus. However, its usefulness is debatable. We also question the legitimacy of its scan results. As soon as it is installed, it will scan your computer for issues and show you rather worrying results. Purposely made to appear as alarming as possible, the scan results will display hundreds or even thousands of issues in a bright red background. The thing about these kinds of programs is that they knowingly try to mislead users into thinking that the issues are serious, while in fact they’re very minor. The programs do not show a clear distinction between actually serious issues and minor ones. It will detect meaningless junk files as issues, and claim that they are slowing down your computer. However, in reality, they have no effect. If you try to use the program to fix the detected issues, you will be asked to buy the full program, which costs $50 but the current price is $30. The program is very expensive, particularly if you take into account that a lot of the features it offers are made available for free by your Windows.

One worrying feature Ashampoo WinOptimizer has is a registry cleaner. It will scan the registry entries and delete some of them if it determines they’re not in use. However, touching the registry is not a good idea. Microsoft has even advised users against using programs with this feature because it could cause serious damage.

“A damaged Windows registry can exhibit a range of symptoms including excessive CPU utilization, longer startup and shutdown times, poor application functionality or random crashes or hangs. These random crashes and hangs can ultimately lead to data loss due to the systems inability to save data back to the storage location during the occurrence.”

You don’t need to clean the registry, and you should avoid program that try to do it because deleting the wrong entry could lead to your Windows needing to be reinstalled.

If you are not planning on buying the program, having the free version will not benefit you. If you have decided to delete Ashampoo WinOptimizer, you can do it using anti-virus programs. A lot of security programs like ESET, McAfee, Symantec and even Microsoft will detect it as a potential threat and remove it for you. However, you can also uninstall Ashampoo WinOptimizer yourself. But do make sure all associated files are gone.