Kxde ransomware is a file-encrypting malware, a generic ransomware version from the Djvu/STOP malware family. The cybercriminals operating this ransomware have released hundreds of versions already and have infected thousands of users. Ransomware versions from this family are considered to be very dangerous malware infections because once they encrypt files, it’s not possible to decrypt them without buying the decryptor from the cybercriminals. Files encrypted by this particular ransomware can be identified by the .kxde extension added to them. Encrypted files can be recovered quite easily if users have copies saved in a backup. For users with no backup, file recovery will be more difficult. And paying the ransom is not the recommended option because there are no guarantees you’ll actually get the decryptor. 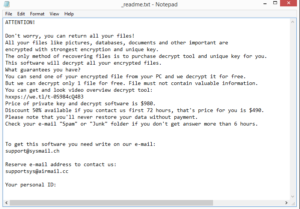 Ransomware from this family usually displays fake Windows update windows to distract users from the fact that their files are being encrypted. While the fake window is displayed, the ransomware will encrypt all personal files, including photos, videos, images, documents. Encrypted files can be recognized by the extensions added to them. This one adds .kxde, and an encrypted text.txt would become text.txt.kxde. You will not be able to open any of these files unless you first use a decryptor on them. But getting the decryptor will not be so easy.

As soon as the ransomware finishes encrypting files, it drops a _readme.txt ransom note in all folders that have encrypted files. The note, while very generic, does explain how to acquire the decryptor. Unfortunately, it involves paying $980 in ransom. The note also mentions that those who make contact within the first 72 hours will get a 50% discount. Whether that is actually true or not is not certain but if you’re considering paying the ransom, there are certain risks you need to be aware of. The most important thing to mention is that there are no guarantees you’ll actually get the decryptor even if you pay. You are dealing with cybercriminals, and they’re unlikely to feel any kind of obligation to help you even if you pay. Furthermore, your money would go towards other criminal activities.

If you have a backup, you will be able to recover your files with no issues as long as you first delete Kxde ransomware from your computer. Make sure to use anti-malware software for Kxde ransomware removal because this is a very complex infection. If you try to do it manually, you could end up causing additional damage. So it’s much safer to use anti-malware software. Once the malware is gone, you can safely connect to your backup.

For users who do not have the habit of backing up files and do not have copies of encrypted files, file recovery may not be possible. There is the option of waiting for a free decryptor to become available but that may be a while. Because this particular ransomware uses online keys to encrypt files, the keys are unique to each victim. Unless those keys are released by the cybercriminals themselves or by law enforcement, it’s unlikely that malware researchers will be able to release a free Kxde ransomware decryptor. However, it’s not impossible. So back up your encrypted files and wait for a free decryptor to become available. It’s worth mentioning that you need to be very careful about where you look for decryptors. There are many dangerous sites promoting fake decryptors. NoMoreRansom is a good source for decryptors, and if one for Kxde ransomware is released, it would appear there.

How do users pick up ransomware infections?

Cybercriminals use many ways to distribute malware. And users with bad browsing habits are much more likely to pick up malware infections because they often act carelessly. For example, users with poor online habits are much more likely to open unsolicited email attachments. And email attachments are one of the most popular ways malware is distributed. Malicious actors buy email addresses from various hacker forums and then send emails with malware attached to them to those addresses. As long as users do not interact with those emails, they are not dangerous. However, the moment the attached file is opened, the malware will initiate. Fortunately for users, it’s quite easy to recognize malicious emails. The most obvious sign is grammar and spelling mistakes. Malicious actors usually claim to be from legitimate companies in their emails, but the emails themselves are usually full of grammar/spelling mistakes. No official correspondence from a legitimate company will ever contain obvious mistakes because they look unprofessional. Grammar/spelling mistakes are often a sign of a malicious email. Another sign is an email from someone who should know your name using generic phrases like User, Customer, Member, etc., to address you. If an email demands that you open an attachment but it somehow feels off, you should be very cautious. Some malicious emails may be more sophisticated, which is why it’s a good idea to scan all email attachments with anti-malware software or VirusTotal.

Poor online habits also include using torrents to pirate copyrighted content. Torrent sites are often very poorly regulated, which allows malicious actors to upload torrents with malware in them. In most cases, malware can be found in torrents for popular movies, TV shows, video games, software, etc. It’s especially common to find malware in torrents for content that’s particularly popular at a certain time. For example, when a new Marvel movie comes out, its torrents are usually full of malware. So not only is pirating essentially stealing content, but it’s also dangerous for the computer/data.

It’s never recommended to try to get rid of ransomware manually unless you know exactly what you’re doing. If you try to remove Kxde ransomware manually, you could accidentally cause additional damage or not fully remove the ransomware. Not fully removing it could later allow it to recover. And if you try to access your backup while the ransomware is still present on your computer, your backed-up files could become encrypted as well. If that were to happen, your files may be lost permanently. Thus, we strongly recommend using a reliable anti-malware program. Once the ransomware is fully gone, you can safely access your backup to start file recovery. If you do not have a backup, back up your encrypted files and occasionally check NoMoreRansom for a free Kxde ransomware decryptor.