What is Android Charging Boost

Android Charging Boost refers to the blue screen with ads that appear on Android device screens when there’s a potentially unwanted app (PUA) installed. The blue screen appears when users connect their Android smartphone to the charger. While this random screen with ads may alarm users, it’s nothing overly serious, as long as users don’t click on the ads. You should never trust adware or PUA generated ads because you could be exposed to potentially malicious content. Clicking on the wrong ad could lead you to a site that may trigger a malware download, or you could encounter scams. 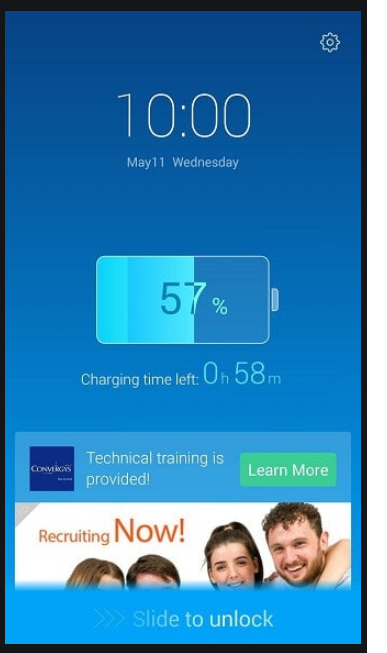 The blue screen does not look threatening, it’s merely a blue screen with an ad at the bottom, the date and time at the top, and the charger indicator in the middle. You may also start getting more ads than usual when browsing the Internet, and get randomly redirected to weird sites. Understandably, this is very annoying behaviour, but there is no reason to put up with it. It’s caused by a questionable app installed on your Android device, and if you get rid of it, you will be able to remove Android Charging Boost screen permanently.

Why is the blue screen appearing in your Android

In order to avoid situations like this, you need to be very careful with what apps you install onto your smartphone. First of all, avoid downloading apps from unofficial third-party app stores. Those app stores are usually not regulated or have very lax security, meaning all kinds of malicious apps could be hosted on them. If you do insist on downloading apps from third-party stores, always do research before. Look into the developer, read the reviews, check the permissions an app wants and consider why it would need them. Never download apps randomly without making sure they are safe.

The blue screen will appear when you connect your Android smartphone to a charger. As we said, it shows the time, has the charging indicator with the time left until fully charged, and an ad at the bottom. The ads seems to generally be for apps. We strongly discourage you from interacting with them. You should especially avoid downloading the offered apps because who knows what you’ll end up with. But otherwise, the Android Charging Boost screen is not dangerous, albeit very annoying.

In addition to the blue lock screen, you will also see more ads, pop-ups and redirects when browsing. This is not only annoying but can also expose you to unreliable content. If you get redirected you should immediately close the window without interacting with the site. You should also avoid interacting with ads in general, until you determine and get rid of the app that is showing you these ads.

To delete Android Charging Boost blue lock screen, you will need to get rid of the app that’s causing it. It’s usually unnecessary utility apps that are the problem, so check your installed apps for something like WiFi Analyzer, Battery Saver, etc. If you cannot determine what’s causing the issue, delete all apps you do not use, and disable the rest one by one until you determine the culprit.

Another option is to install a reliable security app and perform a scan of the device. If any app is displaying suspicious behaviour, the security app will detect it.