Three Square Market, a software company in Wisconsin has offered its employees to have Radio-Frequency Identification (RFID) microchips implanted into their bodies. In what seems to be a simple procedure, around 50 employees had the microchips inserted into their hands. This allows them to navigate their workplace easier, with just one swipe of a hand. They will be able to purchase goods, open doors and log into computers more conveniently. 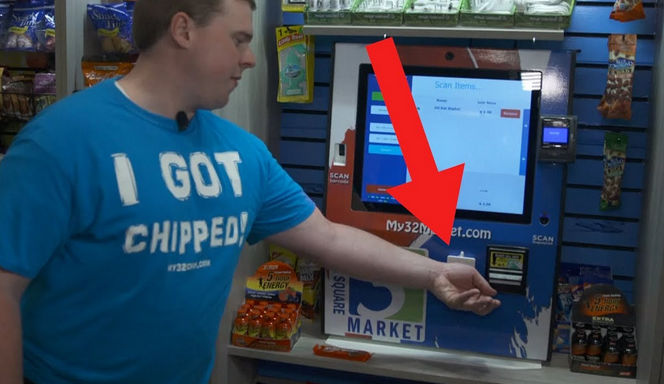 Employees volunteer to get chipped

The company help a party on the 1st of August where volunteers had the tiny chip planted in their hands by a tattoo artist. The chip goes between the index finger and the thumb, and is no bigger than a grain of rice. Around 50 of the company’s employees chose to have this reportedly painless procedure done. This procedure is in no way mandatory. While some might question the safety of such chips being placed in humans, one volunteer has said that this will be common practice in the next fix to ten years.

“It was pretty much 100 percent yes right from the get-go for me,” Sam Bengtson, a software engineer says in regards to the procedure. “In the next five to 10 years, this is going to be something that isn’t scoffed at so much, or is more normal. So I like to jump on the bandwagon with these kind of things early, just to say that I have it.”

Others were not as eager to rush.

“Because it’s new, I don’t know enough about it yet,” Three Square Market’s sales director Melissa Timmins said. “I’m a little nervous about implanting something into my body.” That does not mean she was not excited. “I think it’s pretty exciting to be part of something new like this,” she said. “I know down the road, it’s going to be the next big thing, and we’re on the cutting edge of it.”

The employees did not have to pay for the chip or the procedure, the whole thing was covered by the company.

Raises concerns over the safety of such chips

While this is not the first case of chips being inserted into humans, some concerns were voiced about whether it is safe to do this and if it is ethical. One of the main concerns seem to be tracking. The company claims that the chip does not have tracking capabilities and modern phones are more invasive. However, Michael Zimmer, director of the Center for Information Policy Research at the University of Wisconsin-Milwaukee, argues that with chips, people have less of a choice than with phones.

“With my phone, I can turn it off, I can to leave it at my desk and I can control the apps that I have access to,” Zimmer told ABC News. “There are a lot more ways that I can manage what people know about me.”

It would be much more difficult to turn the chip off, if possible, thus it would be significantly easier for people to lose control over who has access to their bodies and what they are doing. Three Square Market has said that they are not interested in tracking their employees but that does not mean others will not be as well.

“I think we need to be a little more cautious, making sure that we’re not going too quickly and that we understand the implications,” Zimmer said. “There are some things that we need to make sure we’re paying attention to before we start walking down this path.”

People thinking about getting chip implanted are encouraged to find out everything about the procedure, whether data will be collected and how it would be managed. While Three Square Market says employees would be notified if their data was used or if their behavior was tracked, other companies might not as fair.

“What if they decide to do other kinds of more intrusive tracking — like sleep tracking or behavioral tracking — where do the consent mechanisms come into place?” Michelle De Mooy, privacy and data expert at Center for Democracy & Technology raises the question.