Ufwj Ransomware is file-encrypting malware from the notorious Djvu/STOP ransomware family. The gang has released hundreds of these ransomware versions, and they can be differentiated by the extensions they add to encrypted files. In this case, files will have .ufwj attached to them. Currently, Ufwj ransomware does not have a free decryptor. Once files are encrypted, the ransomware drops a _readme.txt ransom note which explains the decryption process.

Ufwj Ransomware is one of the newest variants of the Djvu/STOP ransomware family. The cyber crooks responsible for this malware have released more than two hundred ransomware versions, two of which (Gujd and Moqs ransomware) we have written about before. They’re more or less identical, and you can identify which one you’re dealing with by the extension added to encrypted files, which in this case is .ufwj.

As you’ve likely already noticed, this ransomware encrypts personal files, including photos, videos, documents, and images. While the encryption process is happening, the ransomware will show a fake Windows Update window to cause a distraction. 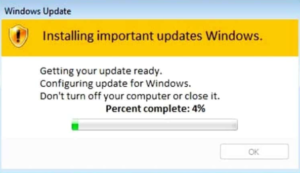 All encrypted files will have the .ufwj extension. For example, image.jpg would become image.jpg.ufwj. These files will be unopenable unless they’re first run through a decryptor. But unfortunately, the only ones with a decryptor are the cybercriminals operating this ransomware. This is explained in the _readme.txt ransom note that gets dropped in all folders containing encrypted files. The note explains that recovering files is possible but buying the decryption tool is necessary. The tool is offered to you for $980, or for $490 if you make contact with them within the first 72 hours of infection. manager@mailtemp.ch and helpmanager@airmail.cc are the contact addresses provided in the ransom note.

Paying the ransom may seem like the best option, but we highly recommend not doing that. Keep in mind that you are dealing with cybercriminals, and it’s unlikely that they will feel any kind of obligation to help with file decryption. There’s nothing really stopping them from just taking the money and not sending anything in return. Because many users in the past have not received their decryptors, it’s important that you are aware of the risks involved in paying the ransom.

If you have a backup of your files, you shouldn’t have an issue with file recovery, provided you first remove Ufwj Ransomware from the computer. If the ransomware is still there when you connect to your backup, the files would become encrypted as well.

If you do not have a backup, file recovery is much more complicated. It is possible that a free decryptor will be released sometime in the future. There already is a free Djvu/STOP decryptor developed by software company Emsisoft but it will not work to decrypt files encrypted by newer versions of Djvu, which includes Ufwj Ransomware. Ufwj Ransomware and other versions released after 2019 use online keys for file encryption, which means that the key is different for each victim. Without those keys, developing a universal decryptor that would help everyone is not possible. But it is possible that the keys will eventually be released by the cybercriminals themselves, or by law enforcement. So if you’re out of options, back up encrypted files and wait for a decryptor. Though we should mention that there are many fake decryptors advertised on various forums so only trust legitimate sources like NoMoreRansom with safe decryptors.

Serious infections like ransomware have a variety of different distribution methods, including spam email attachments, malicious ads, fake downloads, torrents, etc. In many cases, it’s users’ bad habits that lead to infection. Developing better habits, as well as familiarizing oneself with the distribution methods can go a long way towards avoiding malware.

One of the most common ways users pick up ransomware is via malspam emails. Malicious actors buy databases with thousands of email addresses from hacker forums and launch generic malspam campaigns using them. They’re pretty generic most of the time so as long as users know what to look for, they should be able to identify malicious emails. They are usually sent from random-looking email addresses, have loads of grammar and spelling mistakes, and pressure users to open the attached file because it’s a supposedly important document. In many cases, the senders of such emails claim that users use their services but still use generic User, Member, Customer, etc., words to address them instead of their names. Companies always use customer names when sending official correspondence, so generic terms are a sign of a potentially malicious email as well. And it should be mentioned that if someone is targeted specifically, none of the above-mentioned signs may be present. But most users will be targeted in generic attacks. Lastly, all unsolicited email attachments should be scanned with anti-virus software or VirusTotal before they’re opened.

Torrents are also a very common way users encounter ransomware. Torrent sites are quite badly moderated, which cyber criminals take full advantage of. They upload malware disguised as a torrent for popular content such as a movie or video game. It’s especially common to find malware in torrents for content that’s particularly popular at the time. For example, when the fantasy series Game of Thrones was airing, loads of episode torrents had malware. Using torrents to pirate, or rather pirating in general, is discouraged not only because it’s essentially stealing content but also because it’s dangerous for the computer.

Lastly, users who download software and content from unreliable sources also risk picking up infections. Programs and updates should only be downloaded from official sources, and all software should be researched before it’s installed.

Ransomware is a very complex ransomware infection so it’s not a good idea to try and remove Ufwj Ransomware manually unless you know exactly what you’re doing because you could accidentally cause additional damage. If you’re not careful, you may miss something during the removal process, which could later allow the ransomware to recover. And if you connect to your backup while ransomware is still present, the files you backed up will become encrypted.

Unfortunately, just because you delete Ufwj Ransomware does not mean that your files will be automatically decrypted. A special decryption tool is necessary for that. However, since it is possible that a free decryptor may become available sometime in the future, you should back up encrypted files and occasionally check NoMoreRansom for a decryptor.