Hgsh ransomware is a file-encrypting malware from the Djvu/STOP malware family. The group operating this ransomware has released hundreds of ransomware infections so far and continues to release them on a regular basis. Hgsh ransomware is the most recent version. It encrypts your files and then demands that you pay a ransom to be able to recover them. You will not be able to open any files with the .hgsh extension unless you first run them through a decryptor. Unfortunately, the decryptor is at the hands of cybercriminals operating this ransomware. Considering that they are cybercriminals, they will not just give you the decryptor. You will be asked to pay $980 for it. 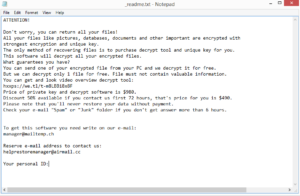 Hgsh ransomware is part of the Djvu/STOP ransomware family. It’s one of the hundreds of ransomware versions released by these cybercriminals. They are all more or less identical, but you can differentiate them by the extensions they add to encrypted files. In this particular case, the ransomware will add .hgsh, hence why it’s called Hgsh ransomware. It will encrypt all your personal files, including photos, videos, documents, etc. For example, image.jpg would become image.jpg.hgsh. You will not be able to open any files with this extension unless you first use a decryptor on them. However, the decryptor is not freely available. The malware operators expect you to pay for it, and it doesn’t come cheap.

The moment the ransomware initiates, it will start file encryption. During the whole encryption process, the ransomware will show a fake Windows update window. When the process is complete, the ransomware will drop a _readme.txt ransom note in all folders containing encrypted files. The note is very generic and explains that files have been encrypted and how you can recover them. Unfortunately, you would need to buy the decryptor in order to decrypt files. The decryption tool is $980, though the note promises a 50% discount for those who make contact within the first 72 hours. Even if that were true, we don’t recommend paying the ransom. You getting the decryptor is not guaranteed because you are dealing with cybercriminals. They will not necessarily feel obligated to help you after getting the payment from you. A lot of victims did not receive their decryptors in the past. So while whether to pay or not is your decision, we feel it’s necessary to inform you of the risks. Furthermore, as long as victims keep paying the ransom, ransomware will remain an issue.

If you have a habit of backing up your files and have copies of the encrypted files, you should have no issues with file recovery. However, you first need to remove Hgsh ransomware from the computer using anti-virus software. Do not attempt to delete Hgsh ransomware manually because you might not fully get rid of it. If the ransomware is still there when you connect to your backup, those files in a backup would become encrypted too.

Unfortunately, it’s currently impossible to recover Hgsh ransomware encrypted files without a backup. Developing a free Hgsh ransomware decryptor is difficult because files are encrypted using online keys. The keys are unique to each user and unless malware researchers can acquire all of them, they will be unable to develop a free decryptor. However, it’s not impossible that the keys will eventually be released. Either by cybercriminals themselves when they close up shop or by law enforcement if they catch those responsible. In the meantime, you can try Emsisoft’s free Djvu/STOP decryptor. It won’t necessarily work but it’s worth a try. You should also be very careful when looking for a decryptor because there are a lot of fakes ones. NoMoreRansom is a safe source for decryptors, and if one for Hgsh ransomware is released, it would appear on there.

How did the ransomware enter your computer?

It’s very common for malicious actors to spread malware using emails with attachments. It’s a low-effort malware distribution method that’s pretty convenient for malicious actors. They purchase thousands of email addresses from various hacking forums and then send them emails with malicious attachments. When users open those attachments, the malware initiates. Because these emails do not target anyone specific, they are very generic. That works in users’ favor because this makes scam emails easily recognizable. One thing to note is that malicious senders often claim to be from legitimate companies. But one of the things that give them away is grammar and spelling mistakes. No legitimate email from an official sender will contain mistakes because they make a company look unprofessional. But whether it’s done or purpose or not, emails carrying malware are often full of mistakes. Another sign that an email could be malicious is if an email addresses you as “User”, “Member”, “Customer” when the sender claims to be from a company whose services you use. Legitimate senders will always address you by name if you use their services.

Some malicious spam attempts are more sophisticated. Because of this, we strongly recommend scanning all unsolicited email attachments with anti-virus software or VirusTotal. This will prevent you from opening malicious email attachments by accident.

If you are a torrent user and pirate copyrighted content, you’re at a much higher risk of picking up a malware infection. Torrent sites are notoriously badly regulated which allows cybercriminals to easily upload malicious content disguised as torrents for popular movies, TV series, video games, software, etc. It’s especially common to find malware in torrents for recently released content. For example, when Marvel releases new movies, torrents for them are often full of malware.

Because ransomware is a very serious malware infection, it’s not a good idea to try to remove Hgsh ransomware manually. You could accidentally cause damage to your device or you may not fully get rid of the malware. Keep in mind that if you connect to your backup while the ransomware is still present, the files in the backup would become encrypted as well. So use anti-virus software to delete Hgsh ransomware and only then access your backup.