Pornography Warning Error is a generic tech-support scam alert that falsely informs users that access to their PC has been blocked. “Pornography-warning-error-code: #0x268d3(x8)” is what this fake security alert shows. Supposedly, your computer has been infected with “pornographic spyware” that’s stealing your sensitive data and files. The pop-up claims that Microsoft has blocked your computer for security reasons. In reality, all of the pop-up’s claims are not true. It’s merely a tech-support scam that aims to trick you into calling fake tech-support so that scammers could scam you. 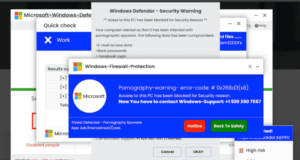 Tech-support scams are incredibly common. You can encounter one merely by clicking on the wrong ad. However, they are harmless as long as you don’t interact with them by dialing the displayed phone number or downloading the offered program. The best course of action is to just close the pop-up.

While there are thousands of these currently active tech-support scams, they are all more or less identical. They use threatening language to inform users that their computers have been infected with some kind of malware, and then ask them to dial the shown number to get technical support. In this particular case, users are redirected to a fake Microsoft website where numerous pop-ups appear. One pop-up is an imitation of Microsoft’s anti-virus program Defender, another explains that files and data are being stolen, and another shows a phone number that users are supposed to call.

“Your computer alerted us that it has been infected with pornographic spyware,” is what one of the pop-ups claims. These scammers want you to believe that your computer signaled to Microsoft that’s it’s infected, and the company then decided to block it to supposedly “protect our network”. More tech-savvy users will realize that this is not how any of this works. Microsoft does not keep track of which computer is infected with what, nor do they care. And the company certainly does not block infected computers. Furthermore, your browser will never display a legitimate virus alert because it’s not capable of detecting it. Virus alerts are only reliable when they come from your anti-virus program. We should also mention that phone numbers in pop-ups are a sign that it’s a scam. No company (not Microsoft, not Apple, etc.) will ever make such unsolicited contact. If you wanted to contact their customer support, you’d have to get the phone number from their official website.

If you’ve never encountered a tech-support scam, you may be wondering what their purpose is. These scams are run by scam call centers that take advantage of people by asking them to pay for tech services they don’t actually need. If you were to call one of the numbers shown in these pop-ups (in this case it’s +1 929 390 7557), you would be connected to professional scammers pretending to be legitimate tech support. They would inquire about the issue and then start their usual spiel about a virus damaging your computer. They will offer to remove the threat if you allow them remote access to your computer. If you do, they will show you fake proof that your computer is indeed infected. While they’re pretending to fix your computer, they might steal your files or set a password for your computer. Once sufficient time has passed, they will request that you pay for their services. Usually, tech-support scammers demand at least a couple of hundred dollars. If they locked the computer with a password and you refuse to pay, they would refuse to give you the password.

Why are these pop-ups appearing on your screen?

There are a few explanations for the appearance of tech-support scam pop-ups on your screen. In most cases, they are triggered by the sites you visit. Certain websites (e.g. those that have pornographic or pirated content) are often considered to be high-risk due to the ads they show. Clicking on anything on those sites can often lead to redirects to various scam pop-ups. To prevent these pop-ups from appearing, simply install an adblocker program.

If the pop-ups are appearing even when you’re browsing safe sites, your computer may be infected with adware or a similar infection. They’re not serious threats but they do behave in a very annoying way. Since they’re not considered to be malware, such infections are often installed via free software bundling. The method essentially allows them to install without explicit permission from users. It’s a rather frowned upon method, and programs that use it are often detected as potential threats by anti-virus programs.

The way it works is adware (or a similar infection) is added to a free program as an extra offer. These extra offers are permitted to install alongside the program they’re attached to automatically and without explicit permission. These offers are optional but to prevent users from deselecting them, they’re initially hidden. If you want to be able to deselect them, you need to pay attention when installing free programs. Most importantly, you need to use Advanced or Custom settings instead of Default. Default settings will conceal all offers and allow them to install. But if you use Advanced, everything that’s been added will become visible. You will also be given the option to deselect all offers. Some of the offers may seem useful at first sight but allowing their installation is not a good idea.

There is no need to worry about the contents of this fake security alert. You can simply close the window and be done with it. However, because these pop-ups can sometimes be shown by actual infections on your computer, it’s a good idea to run a scan of the computer with anti-virus software like WiperSoft. If the fake alerts are indeed triggered by an infection, only getting rid of it would stop the redirects. We also highly recommend installing an adblocker program to block all intrusive advertisements and pop-ups while you’re browsing.

If you fell for this Pornography Warning Error tech-support scam and transferred money to scammers, contact your bank as there may be something you can do to recover your money.