“I have got two not really pleasant news for you” email is a typical sextortion scam that tries to blackmail users into paying thousands of dollars to not have a supposed explicit video of them released. It’s a very common scam that’s usually referred to as sextortion due to the blackmail material being a supposed sex video of the victim. Users who receive such an email can disregard it without worry, as none of the contents are true. 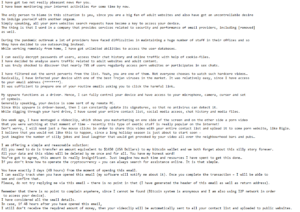 The full text of the sextortion email

“I have got two not really pleasant news for you” is how an email part of a sextortion campaign greets users. The sender of the email introduces themselves as some kind of security specialist who, because of the pandemic, found some free time to spy on the user base of the company they work for. They claim to have “decided to analyse users traffic related to adult websites and adult content” and came across you, the receiver of the email. According to the email, you supposedly clicked on a malicious link in an email, which allow the scammer’s “one of the best Trojan viruses in the market” to be installed on your computer. This trojan supposedly gave the malicious actor complete access to your computer, including to the microphone and camera. They even claim that the malware would not be detected by anti-virus programs because they “constantly update its signatures”, just in case users scan their devices and nothing is detected.

For anyone who has at least minimal knowledge about how malware works and cybersecurity in general, the email will be complete nonsense. It goes to great detail about how the supposed malware managed to get into the computer and spy on the user in order to appear at least somewhat legitimate. But it will only work to convince users who know very little about computers and malware.

After they’re done explaining the technical nonsense, the scammer will claim that you have been spied on via the webcam while visiting an adult website. Supposedly, a dual video has been made, and one side shows a pornography video and the other displays a video of you watching it. According to the email, the video would be released to all of your contacts unless you agreed to pay $1450 in Bitcoin. The email gives 48 hours for the money to be paid, otherwise the video will be released.

In case it’s not clear enough, the whole email is nothing more than a sextortion scam, a very typical one at that. There is no malware on your computer (unless it’s completely unrelated to this), nor has a video of you watching pornography been made.

Some sextortion emails have legitimate passwords in them

While these sextortion scams are more or less identical to one another, they may have additional information or word the email differently, depending on the sextortion scam campaign. While this “I have got two not really pleasant news for you” email scam does not have it, some sextortion emails may contain passwords that users have actually used in the past or are using at the time. Including the password is supposed to give the email more credibility, and it may work on users who know very little about such scams.

In reality, the passwords are bought from hacker forums, along with the email addresses. This data ends up on hacker forums after data breaches and leaks, which is why if your password is included in one of these sextortion emails, it has been leaked before. If it’s a password you still use, you need to change it immediately. However, a correct password included in the email is not evidence of an email being legitimate.

If you have received or ever receive this email, you can just remove “I have got two not really pleasant news for you” email scam from your inbox, along with every other sextortion email. These kinds of emails can sometimes come with email attachments that may be hiding malware. Under no circumstances should you open the attachment. If you have already done so, scan your computer with anti-virus software immediately, just in case some malware infection is present.