What is the Critical Firefox Update Scam?

Critical Firefox Update Scam is a scam that initiates the install of malicious applications and a fake alert that typically pop-ups on the screen when users are visiting adult-themed websites. This virus is one of the main components of the huge malvertising campaign. Firefox Update can be found on malicious websites or legitimate websites that have been hacked. When someone visits or is being redirected to one of these hacked sites, it will be presented with a page that states that the Firefox browser needs an update. If you click on the “Update” button, rather than downloading an update package for your browser, you will be downloading malware onto your computer. 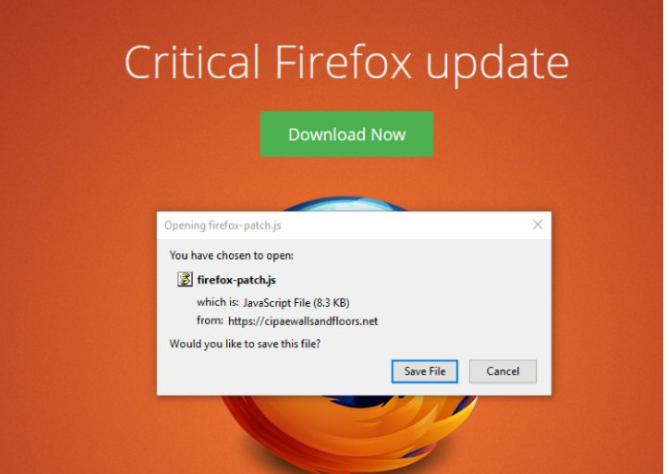 What problems cause the Critical Firefox Update Scam?

The malicious program might let cybercriminals launch click-fraud activities or install other malicious programs on the device. Furthermore, if Critical Firefox Update pop-up brings the Trojan horse to your computer system, the malware will supposedly give remote access to the developers and allow the crook to carry out malware-laden activities, inject infected executables, and other malware forms.

Also, our browser may be redirected to sites that show this “Firefox Update Center” fake update message either by malicious advertisements on the sites you visit or adware. This guide was written to help Windows users remove malware from their devices, if your just looking for a way to block the “Firefox Update Center” pop-ups on a specific site, then you can use a free browser extension like Adblock.

When it comes to adware, these malicious programs are bundled with other free software that you download off of the Internet. Unfortunately, some free downloads do not adequately disclose that other software will also be installed and you may find that you have installed adware without your knowledge. Once a malicious program is installed, whenever you will browse the Internet, your web browser will be redirected to sites that display the “Firefox Update Center” fake update message.

Here are a few typical signs that you have adware on your system:

Be careful and pay attention when you are installing software because usually, it includes optional installs.

How to get rid of the Critical Firefox Update?

Automatic Critical Firefox Update Scam removal is necessary because you need to wipe out all malicious components from the system, including the Kovter.C trojan which might be responsible for stealing sensitive information or installing other malware on the device. Theft of personal data and various banking details might relate to monetary losses or criminals might decide to sell the collected information about you on the dark web.

Furthermore, Critical Firefox Update Scam has a very similar version, known as Urgent Firefox Update. This suspicious message is almost the same as the previous one. It claims that Firefox needs to be updated urgently and displays a small window with the same firefox-patch file that is urged to be saved on the machine.

Additionally, The Urgent Firefox Update Scam window announces that such information is coming from similar rogue websites. Note that, no reliable updates or warning messaged will be provided to you via such unrecognizable sources, so you should close the fake update window before hackers manage to trick you and inject malicious software in your computer system.

It’s important to complete the virus elimination task immediately because the trojan might steal sensitive and banking-related information. If you are not trusting your IT skills try automatic Critical Firefox Update Scam removal. However, you can also see some suggestions below. They will let you disable the virus first. It is important to stop malicious activities from being continued, otherwise, you will possibly encounter difficulties during the cyber threat elimination process.