Driver Magic is a potentially unwanted program (PUP) advertised as a driver updating program. Driver Magic may be promoted as a useful program but it doesn’t do anything you can’t easily do yourself manually. 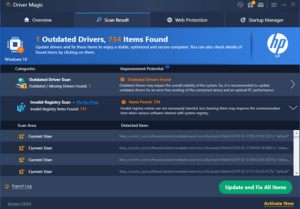 Driver Magic is not a harmful program to have installed but it’s also pretty useless. It’s classified as a potentially unwanted program (PUP) by some anti-virus programs due to its installation methods and overall behaviour. The main issue with Driver Magic is that it may appear out of the blue as it can install via software bundling, and then try to trick you into purchasing its full version.

When it comes to system optimization programs like Driver Magic, they are rarely of any use. The good news is that Driver Magic is not dangerous as it’s not malware. It’s essentially a system optimization program that claims to be able to improve your computer’s performance by updating all your system drivers. It also has a registry cleaner that’s supposed to solve registry errors. Overall, at first sight it may seem like a useful program to have installed if you want to enhance your system’s performance but it’s actually pretty useless. In any case, you shouldn’t be using programs that have a registry cleaning feature because they could cause irreversible damage. And there is no need to use a driver updating program because either drivers are updated automatically, or you can do it yourself pretty easily. And since Driver Magic is a paid program that costs €39,95/6 months, it’s definitely not worth buying it.

Potentially unwanted programs like Driver Magic are often distributed via questionable means, such as software bundling and fake alerts. It does have an official website but it would be pretty difficult to come across it when looking for such programs, so it’s more likely that you installed it accidentally.

Since it’s not a useful program to have, and certainly not worth purchasing, we recommend you uninstall Driver Magic from your computer. There is no reason to leave programs you don’t use installed, as they will only take up space.

Potentially unwanted programs, particularly system optimizers, are often distributed via software bundling. With the amount of driver updating programs available, it’s not very likely that you will come across this particular one when looking for driver updaters. Though it does have an official website and can be downloaded from those free program download sites. If you did install it knowingly thinking it will help improve your computer’s performance, we recommend you do extensive research before installing programs in the future.

Using software bundling to install is one of the reasons why a program could be classified as a PUP by anti-virus programs. It’s a pretty sneaky installation method and often results in users accidentally installing programs they don’t want. So if you ever find a random program on your computer that you don’t remember installing, it probably installed via software bundling.

A program installing via software bundling essentially means that it was attached to some other program as an extra offer. It’s especially common for those free programs available on free download websites to have items attached to them. Those items are usually adware, browser hijackers and potentially unwanted programs (PUPs). They are set to install alongside automatically, unless you manually prevent them from doing that. But since they’re initially hidden, a lot of users simply don’t notice them, which allows them to install alongside.

To correctly install free software without any extra offers, pay attention to the process and always opt for Advanced (Custom) settings instead of Default. Advanced settings will display all extra offers that have been added, and you will have the option to deselect them. All you really need to do is uncheck the boxes. Make sure to do that with all free programs you install, as that will prevent a lot of junk from getting into your computer.

Should you remove Driver Magic?

Driver Magic is advertised as a useful program that will supposedly improve your computer’s performance by updating your drivers. However, it’s not actually a particularly useful program. The good news is that it’s not malicious and will not harm your computer.

When it installs, it will start showing notifications that you should scan your computer for issues related to drivers and the registry. If you do perform a scan, you may be shown quite alarming results, with hundreds of issues detected. Keep in mind that while the number may be worryingly huge, it doesn’t mean there’s something seriously wrong with your computer. Programs like Driver Magic often detect completely minor issues as potentially serious ones, giving users the impression that there’s something seriously wrong. It’s a common tactic used by PUPs to pressure users into buying full versions of programs. Driver Magic is also not a free program, it costs €39,95 per six months. That is a lot of money for a program that only updates drivers and cleans the registry. Especially considering that Windows takes care of driver updates automatically, and that using registry cleaners is dangerous because they can delete the wrong registry entry, resulting in broken Windows.

Windows updates usually take care of driver updates so there is no need to use any driver updating programs, especially paid ones.

The easiest way to delete Driver Magic would be to use an anti-virus program. Though you should be able to uninstall Driver Magic manually as well. It’s not a malicious program so it shouldn’t be too difficult.