Facebook creates the perfect environment for scams to flourish

With around 2.2 billion monthly active users, Facebook is the perfect place for scammers to do their thing. There are thousands or even millions of vulnerable users, and what better place is there for people looking to take advantage of others. You could encounter all kinds of different scams, from the silly ones that want you to post something on your wall, to ones that actually do a lot of either financial or computer damage. Minor hoaxes include those posts about Facebook supposedly becoming paid or being able to publicly share your information, while more serious ones include romance scams and malware distribution. Despite awareness being raised about all of these fraudulent schemes, with so many active users, someone is bound to miss the message. 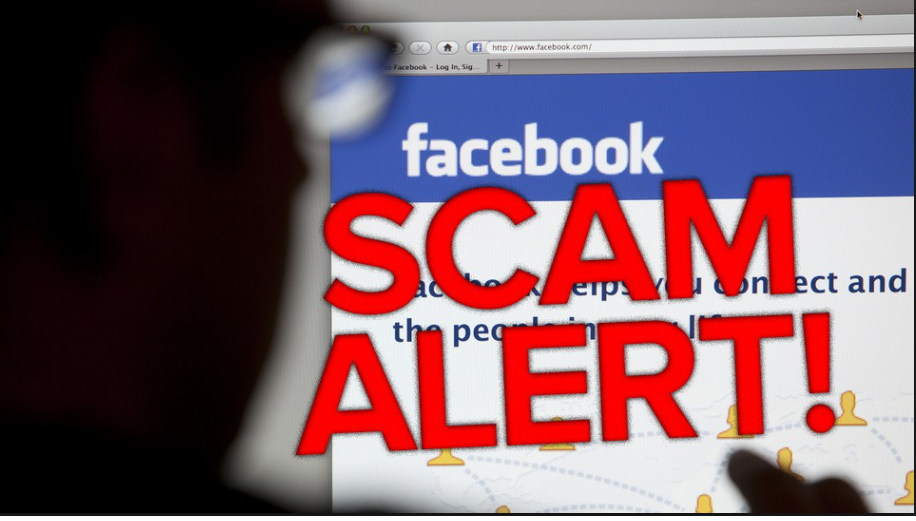 In this article, we will discuss the common scams encountered on Facebook and what you can do to not become a victim. So if you are a regular social media user, you should probably read this carefully, maybe you’ll discover something new.

These scams have been around for a long time, and it’s not really clear what their purpose it. They’re pretty harmless, though reputation may suffer when one falls for it.

One of the classic ones is a scam saying Facebook will no longer be free, or at least some of its features will be paid. Supposedly, everyone who does not want to pay for using Facebook has to post a certain message on their Facebook walls. One particular scam says that people will have to pay for the feature to keep posts private. Otherwise, all private posts will become public. The message continues that in order to keep Facebook free, users must repost the message. Another scam claims that Facebook will start charging users in the upcoming months. Again, if they post the massage on their walls, they will not have to pay.

Even if these scams looked even remotely legitimate, it’s not difficult to check the posted information via search engine. Surely, if Facebook did ever become paid or started publicly sharing users’ personal posts, it would attract a lot of media attention. Thus, it’s not clear why exactly people fall for these. Or why they’re spread in the first place. It likely started out as some kind of joke and just continued being distributed over the years.

Those posts look rather silly but fortunately, do not cause any damage. Unless you count your reputation suffering because of it. And to be clear, they do not guarantee any more privacy.

Romance scams are not only common on Facebook, but on all major social media websites as well. Just as the name suggests, scammers engage with more vulnerable users with whom they develop a romantic relationship. Once trust has been established, scammers try to lure money out of their victims by making up all kinds of stories.

Commonly, scammers target middle aged or senior people, or those that seem more vulnerable as they are unaware of the dangers that lurk on social media platforms. Before making contact, scammers may go through Facebook profiles, looking for any indications that the person is lonely, divorced, widowed, etc. Once they choose their victim, they initiate contact and a scam that could last for months begins.

Typically, scammers introduce themselves as military personnel posted somewhere oversees. They claim to be lonely and in need of someone to talk to. These messages look harmless enough, thus people sharing similar feelings reply. Once the scammer and their victim start regularly exchanging messages, scammers attempt to establish trust and develop a romantic relationship. After months of romantic and comforting messages, and once unsuspecting victims start having romantic feelings, scammers ask for money.

If scammers are pretending to be military personnel posted oversees, they claim that they want to leave but have no money or that they are in some kind of trouble in the country they are posted at. If the victim agrees to pay money, scammers promise to come to them to create a future together. More creative scammers claim to have some kind of business idea and that money is necessary to make it successful. If victims agree to pay the first time, they will be asked to do so again and again until they run out of money. Once victims refuse to send any more money, the scammers disappear, leaving broke and devastated people behind.

The massages start out harmlessly enough, with promises of romance and happily ever afters, but quickly escalate to money requests. This is usually the biggest sign that it’s a scam. These situations are why it’s so important to be very careful about who you make contact with online, because scams are everywhere. If you don’t want to fall victim to one, do not send money to anyone you’ve met via social media.

A lot of fraudulent shops advertise themselves on Facebook, and the social media giant in not always quick to notice them. These flaws in Facebook’s ad services allow scammers to create eye-catching adverts leading to stores that essentially take people’s money without sending anything, or send them cheap quality or damaged products.

Such ads often display pictures of designer products or expensive gadgets with huge discounts to attract attention. For example, a laptop that usually costs around $1000 can be show to cost $200 in a certain store. Or designer clothes that usually cost a couple of hundred dollars could cost $20. Because these seemingly great offers are promoted via Facebook, people don’t think twice about the suspiciously low price and proceed to buy something. They either get charged and receive nothing, or they get a cheap alternative. 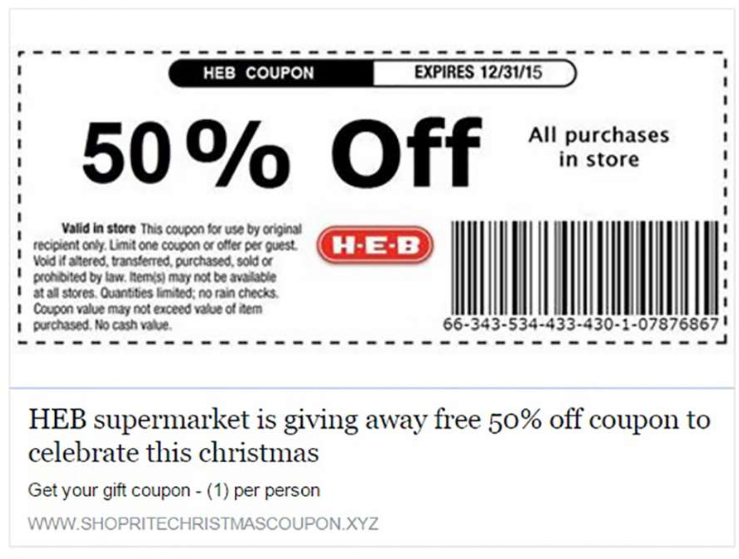 If you actually check the websites that advertise those items with big discounts, a lot of them will be very new, from a week to a month old. They’re unlikely to have any phone number or email address that would connect to customer support, and no actual address. So when people get suspicious after not receiving their purchased items, they have no one to contact. In some cases, if people realize the scam quickly, they can cancel the purchase by contacting their banks. However, if some time has passed and the money has already been taken, banks will be unable to help.

When shopping online, there are certain things you need to be on the lookout for. One golden rule is that if something seems too good to be true, it’s probably a scam. So if you see a new $1000 laptop being sold for $200 without any apparent reason, it’s a scam. If expensive designer clothes are sold for a couple of tens of dollars, it’s a scam. Even if the ads appear on Facebook.

If the prices seem okay but you are unfamiliar with the shop, you first need to look into it. If it has a Facebook page, check the reviews, both good and bad. Be careful about overly positive reviews because that could be a sign that the reviews were either bought or written by shop owners themselves. Look into the shop via search engines, check when they were established, what people are saying, etc. Make purchases only when you trust the shop 100%.

Scammers often use Facebook’s name to fool people into transferring them money. They pretend to be Facebook employees or even Mark Zuckerberg himself and email people with messages about lotteries and winnings. The receiver of the email is informed that they were selected as the winners of some kind of Facebook lottery. Supposed winners are promised huge sums of money but before they can get it, they are asked to pay first, which makes little sense. Generally, in order to win in a lottery, you have to knowingly participate in it first. And you aren’t usually asked to pay when you are selected as the winner. 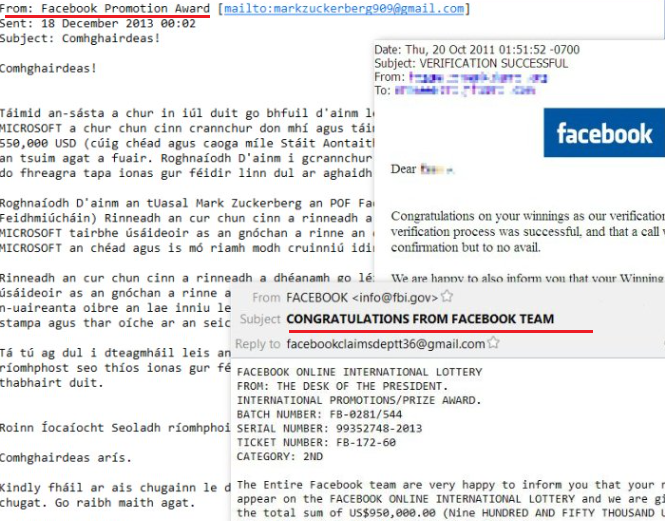 For most people, these scams are pretty obvious. But scammers often have a way of selecting victims that would fall for scams. People in financially difficult situations would be more willing to risk paying a hundred dollars to get half a million, and scammers know this. If you are someone who often posts about money, you might have a bigger target on your back than most people.

As was the case in the above introduced scam, if something is too good to be true, it’s a scam. First of all, Facebook does not host lotteries, nor do they randomly give away money to people. Therefore, no matter how legitimate the message may be, it will never actually be real. There’s not much you can do to avoid encountering these scams, but what you can do is not participate in them.

One of the more dangerous scams encountered on Facebook is a malware spreading one. They have been around for ages, and despite how quickly Facebook stops them, they still manage to infect people. Generally, malware spreads via Facebook massages and posts as a link, disguised as some kind of content. When users press on the link, they give access to their profiles to scammers or end up downloading some kind of virus. 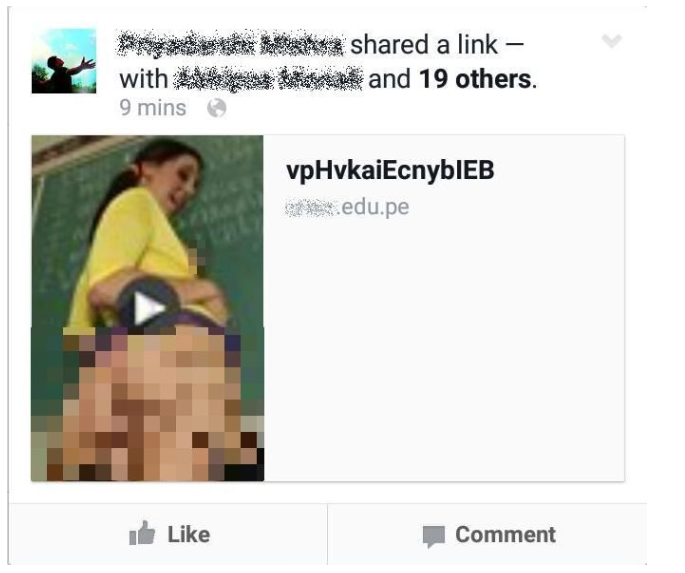 In a lot of cases, users encounter these malicious links in messages from their friends. Those messages may include text like “Is this your video”, “[receiver’s name] video” or “Check out this video”. The text is accompanied by a emojis and a link. The video preview that can be seen in the message often shows the receiver’s picture, making it seem more believable.

One type of scam will lead people to fake YouTube websites where a video is shown to be loading. A pop-ups would suddenly appear, asking people to install an extension in order to view the video. In reality, the video does not exist and the extension is probably malware. In addition to getting malware, the users who open the link end up unknowingly sending out the same link to all the people in their friend list. This allows the malware to spread quite rapidly because many people do not think twice about opening links they get from their friends.

All you need to do to not fall for a scam is to not open any weird links, even if they are sent to you via friends. And you certainly should not install random extensions just because a pop-up asks you to.

Protecting yourself against scams

All of the above mentioned scams are avoidable if you are careful. Be cautious about who you interact with, not just on Facebook but on social media in general. Do not click on random links and do not buy from unreliable stores.

More resources about how you can avoid being a victim of scams on Facebook can be found below.