Idle Buddy virus refers to a potentially unwanted program (PUP) that is advertised as a program that will “donate” your computer’s resources to mine for cryptocurrency. There is little chance you would have downloaded it yourself because it’s not available on any legitimate program download websites, so if it installed on your computer, it used other means to sneak in, such as downloads from questionable websites, spam emails and torrents. In short, infections like Idle Buddy install because of bad browsing habits. 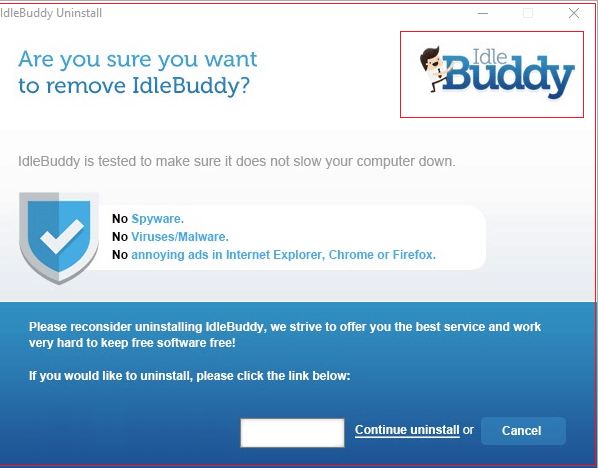 The program does not appear to be particularly dangerous nor does it really do anything besides mine for cryptocurrency. This has very noticeable effect on the computer because it uses your computer’s resources. This results in a sluggish system, crashing programs and other weird behaviour. While this is temporary and will only happen while the PUP is installed, it’s not something you need to tolerate because you get nothing from it. So if you find it installed on your device, remove Idle Buddy virus as soon as possible. Only then will you be able to go back to normal computer use.

Idle Buddy virus can install via a variety of ways

Like we said, it’s not very likely that you downloaded it yourself. Not only would it be a useless program for you to have installed, it’s also not available on legitimate sites. So you likely picked it up some other way. For example, you could have opened a malicious email attachment, downloaded from unsafe sources or used torrents.

Spam emails with malicious attachments are pretty common and are the reason why so many people end up with malware on their computers. It’s possible that Idle Buddy was attached to an email that you received, and when you opened the attachment, the PUP initiated. Spam emails with malicious attachments are often made to look like official emails from banks, the goverment, tax agencies, etc., because this pressures users into opening the emails. Though they often contain a lot of grammar and spelling mistakes, which warn users that it could be malicious. The emails are also often sent from nonsense email addresses that are a mixture or numbers and letters, which is another sign that it’s spam. In general, any unsolicited email with an attachment should be regarded as potentially dangerous until you can confirm otherwise. Scanning the attachment with anti-virus software or VirusTotal is a good idea.

Downloading pirated content, especially via torrents can often lead to all kinds of infections. Malware distributors know that loads of people download free movies, music, books, software, etc., from unsecure sources (such as torrents) and use that to their advantage. So if you want to avoid a lot of malware infections, you either have to stop pirating, or at least be very careful when you download something.

What does Idle Buddy virus do?

Idle Buddy, also known as IBuddy, is classified as potentially unwanted program, which means it’s not malware but it’s not something you want to have on your computer. It’s described as a program that will help you to “donate the time your computer is not in use to calculate complex equations and solve problems”. What that means is that the program will use your computer’s resources to mine for cryptocurrency. The program claims that it will only use the resources when the computer is idle and not used by you, but that is unlikely to be true.

Besides mining, it’s not clear what Idle Buddy actually does. Once it installs, it will start using your computer’s resources, and you will notice right away. Cryptocurrency mining is very taxing on the computer, which results in a much slower system, program taking ages to launch and then crashing constantly, and other weird behaviour. If you were to check your Task Manager, you would see a process using a lot of your CPU, up to 90%. This isn’t particularly damaging long-term, and everything will go back to normal once the program is gone. There really is no reason to allow Idle Buddy to stay installed, seeing as you get nothing from it. The sooner you remove Idle Buddy virus, the better.

It may be difficult to uninstall Idle Buddy virus manually because PUPs can be tricky. We recommend using anti-virus software for this. Once the infection is gone, your computer should go back to normal.