What is MessengerNow adware

MessengerNow is a highly questionable program that advertises itself as Facebook Messenger for Desktop. It basically claims to make using Messenger easier, as you wouldn’t need to open your browser to access Facebook’s website. While the program does use Facebook’s Messenger logo, it is in no way related to the actual Facebook. Therefore, giving your credentials to MessengerNow is not a good idea. In addition to potentially stealing your login credentials, the program also acts as adware. Once it installs, which it often does without explicit permission, it will start showing you advertisements everywhere. It’s essentially adware. Adware generated ads are not considered to be safe, as they can lead to scams and malware. Thus, if you have noticed it on your computer, delete MessengerNow adware. 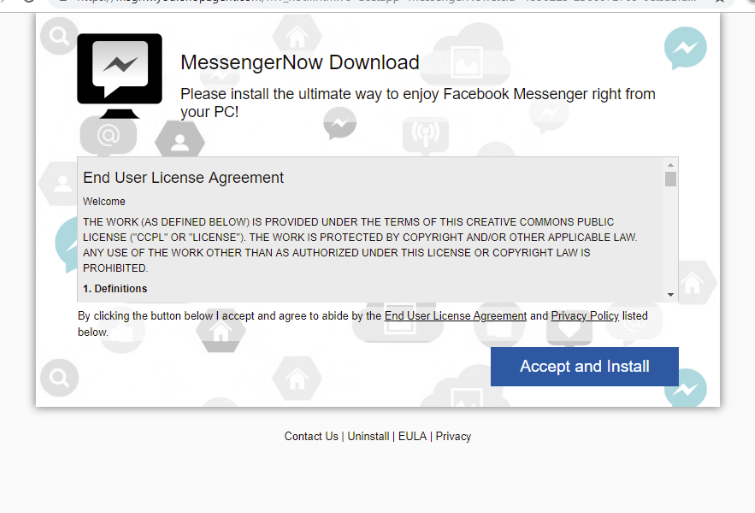 It’s often the case that users do not recall installing the programs, and it’s usually because it uses software bundling to install. The method allows programs to be attached to freeware as extra offers, which leads to them being installed alongside without requiring your explicit permission. We will explain how to avoid unnecessary installations in the following section of the report.

Software bundling is often used by unwanted program developers to spread their programs. Bundling software is essentially adding additional items (usually adware, browser hijackers and potentially unwanted programs) to freeware. The additional offers are preselected by default but can be deselected by users. The problem with that is that the offers are hidden in Advanced settings, so most users miss them. If the offers go unnoticed, they are authorized to install alongside the freeware.

To prevent these unwanted installations, always pick Advanced (Custom) settings instead of Default when given the option. Those settings will make all added offers visible, and you will be able to deselect them. It suggested to deselect all offers because they will likely be of no use to you.

If by some chance you installed the program yourself, next time research programs carefully before installing them. A quick search with Google shows results recommending MessengerNow be removed.

Should you remove MessengerNow adware?

The program will modify certain settings so that it launches every time your computer loads. Because it uses Facebook’s Messenger logo, it may appear as if it’s a legitimate app that belongs to the social media giant. However, MessengerNow is in no way associated with Facebook. The app will claim to make using Messenger easier by providing a desktop app, but using it is highly not recommended. If you were to log in, you would be giving away your credentials to questionable parties, which certainly have no business with your details. Your accounts could be taken over without you being able to get them back.

Once the program is installed, you will notice that there is an increase in advertisements that appear in your browser. Most of the popular browsers will be affected, whether you’re using Internet Explorer, Google Chrome or Mozilla Firefox. You may encounter regular ads, banners, pop-ups and pop under ads. Interacting with them is not a good idea as they could lead you to scams or malware.

You may encounter ads that claim your computer is infected with something. These ads usually provide a phone number for supposed tech-support, which is why they’re referred to as tech-support scams. Professional scammers pretend to be legitimate Microsoft or Apple tech-support and trick users into paying large sums of money for fake support. Ads that have a phone number in them and claim your computer is infected are always fake. Do not call them, as you will be connected to scammers.

MessengerNow adware may also show you ads that claim you have won something. Usually, such ads say that Amazon, Apple or Google are hosting a giveaway and you have won a prize because of one reason or another. Such ads are scams and aim to get your personal information, and will certainly not send you a prize.