Rayban Instagram Virus refers a scam on Instagram that promotes fake deals on Ray Ban glasses. It’s not exactly a virus, but it’s often referred to as such by users, and thus we will call it that in this report as well. 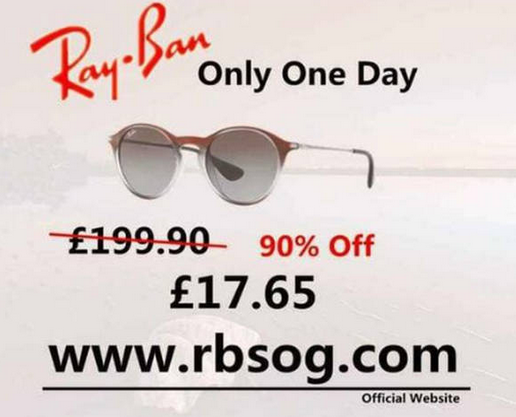 Cyber scammers often use known brand names to push their scams, and the Ray Ban Instagram Virus is just another example. Such scams become particularly active during the holiday period when many people do their shopping, but this one appeared during the summer. Instagram users started noticing that their profiles were seemingly hacked and started displaying posts about a one-day sale of Ray Ban glasses. The posts promise a 90% discount, with $199.90 Ray Ban glasses being offered at $17, and link to a website where the glasses can supposedly be purchased from. As is probably obvious, the site would lead to a fake store that would phish users personal and financial information.

Similar scams have been around for a very long time, and they’re not going away as long as there are users who do not have good security habits. These 90% off discounts floating around the Internet are always scams, and a simply ways for crooks to make easy money. People who fall for such scams are directed to pages that appear like legitimate stores at first glace, but when users purchase something, the items never arrive. Users end up with their money taken, no item, and their personal and financial information phished.

How do scammers take over Instagram accounts to display scams

In many cases, these kinds of scams are displayed on legitimate user accounts, which is why they are able to spread so widely and attract victims. Scammers can take over Instagram accounts to display their scams in a couple of ways, such as guessing passwords, phishing, and data leaks.

Password security remains a major issue these days, with many users still using weak passwords like “password”, “123456”, “qwerty”, etc. Accounts with passwords such as this are almost asking to be hacked into. Scammers can also obtain passwords from past data breaches. There have been numerous services and companies that have suffered data breaches which leaked login credentials, and for users who reuse passwords that is a major issue. There are tools that automatically try breached username/password pairs in order to gain access to accounts, and this attack is called credential stuffing. This means that if a user has used the same password/username for Instagram and a different service that has suffered a data breach, hackers can easily get into the Instagram account. Both weak passwords and password reuse are the result of bad security habits.

Phishing emails are incredibly common, but they’re also not that difficult to avoid. When and email with a lank lands in the inbox, it’s best not to click on it. If, for example, the email is from a bank or a social media service and it asks that users click on the link and login, that should cause suspicion. If it’s not certain whether the email is a phishing attempt, it’s best to manually go to the website and login if necessary.

The Rayban Instagram scam, or any other scam promoted on Instagram, is essentially trying to steal users’ money. They take over legitimate accounts in hopes that users will fall for the scams easier if they see that people they know are advertising the deals. When they click on the link in such a post, they are led to a scam website that is made to appear like the real thing. They would be met with loads of amazing deals, with discounts as much as 90%, and glasses that cost $200 would be sold for $17. More naive users would not think of such big discounts as strange and would proceed to make a purchase, only to end up with nothing. They would have also given away their money, payment card information and loads of personal details.

One great rule to follow when it comes to shopping online is: if it sounds too good to be true, it probably is. Like we said before, these kinds of scams are very popular during the holiday season and Black Friday because companies do actually give pretty big discounts on those days. However, a company like Ray Ban that sells glasses for hundreds of dollars is not going to decrease the price to $20. The same applies to Apple, Microsoft, Samsung, etc. You can’t get a new Apple iPhone or a Samsung smartphone for $100.

When shopping online, it’s important to pay attention to details. For example, in the Rayban Instagram scam, the posts link to the supposedly official Ray Ban website, and the websites have random addresses, such as rbsog.com or rbund.com. Those websites are obviously not the official sites for Ray Ban. So when shopping online, users should make they’re on the official website, and the URL should start with https and not http. Furthermore, we strongly encourage users to read reviews about the online store and do research before making any purchases.

In order to protect Instagram accounts from being hacked, users need to have strong, unique passwords. There are plenty of guides on how to create a strong password, but in short, it should be as random as possible, contain upper and lower case letters, numbers and symbols. In addition, passwords should never be used twice.

Finally, it’s recommended to turn on two-factor-authentication, which would prevent someone from accessing an account even if they had the login credentials. And for users whose accounts have been hacked to display this scam, they need to delete the Rayban Instagram Virus post and secure their account.