Remove “This is not a formal email” email scam

Remove “This is not a formal email” email scam

“This is not a formal email” email is a typical sextortion scam that tries to blackmail users into paying money in exchange for a nonexistent private video to not be released. However, it is nothing more than a scam and can be ignored if it lands in the inbox. 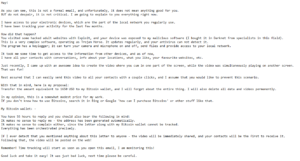 “As you can see, this is not a formal email” is the opening of yet another sextortion email scam that tries to trick users into believing that their computers have been hacked and that an explicit video of them has been created. The reason this is referred to as a sextortion scam is because the scammer claims to have a video of you watching a pornographic video and threatens to release it to all your contacts. In reality, no such video exists, thus it’s a scam, and you can disregard the email altogether.

This particular sextortion scam email follows the typical pattern for such emails. The scammers first explain that they have full access to your device and have been watching what you do for the last couple of months. Supposedly, they were able to infect your computer with malware when you visited a compromised adult website that allowed it to download. “You visited some hacked adult websites with Exploit, and your device was exposed to my malicious software (I bought it in Darknet from specialists in this field)”, the email claims.

Supposedly, the malware is a trojan horse that updates regularly, which would prevent your anti-virus software from detecting it. The email also claims that the malware has a keylogger that “can turn your camera and microphone on and off, send files and provide access to your local network”. The scammers says that this allowed them to steal your information, as well as make a dual video of you watching a pornography video on one side and the video on the other. Unless you agree to pay $1650 in Bitcoin to the provided email address, the video would be sent to all contacts the scammers has supposedly stolen from the infected device.

You can rest assured that this is merely a scam and there is no video, nor is your computer infected with a trojan (unless the infection is unrelated to this). For someone who knows very little about computers and malware, the email’s claims may seem alarming and even legitimate. But for anyone who has at least minimal understanding in this area, it will all seem like utter nonsense.

While not the case is this particular sextortion email, some of them contain legitimate passwords users actually use. This is supposed to make the email contents seem more legitimate, as some users may believe that the passwords are obtained indeed by the scammers hacking the computer. However, there is a perfectly logical explanation for these passwords.

Passwords mentioned in sextortion emails are bought from hacker forums, where they ended up after data breaches or leaks. So if you receive a sextortion email that contains a password you use/used, it has been leaked in the past. If it’s still one you use, you need to change it immediately. It should also be mentioned that you should never reuse passwords. If one account becomes compromised, other accounts that have the same passwords would be too.

These cyber crooks obtain the email addresses the same way. The data usually purchased in bulk so that scammers can launch massive sextortion scam campaigns.

“This is not a formal email” removal

If it lands in your inbox, you can just delete “This is not a formal email” scam email. There is no need to worry about its contents, as there is no malware on your computer, nor has a video of you been created. If the email came with an attachment and you opened it, we strongly recommend you scan your computer with anti-virus software in case some kind of malware was initiated when you opened the attachments.

It should also be said that if you receive such an email, it’s more than likely that your email address has been leaked or part of a data breach. That means you will probably receive more spam in the future.