What is “I have been watching you” sextortion email

What is “I have been watching you” sextortion email 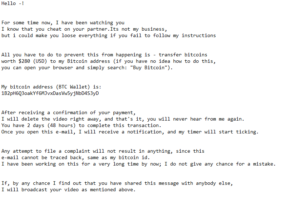 While sextortion scam emails usually follow the same pattern, new campaigns appear regularly. But despite being sent by different groups of scammers, they are more or less identical looking, apart from the phrasing. The scammers first try to catch users’ attention with threatening subject lines. For example, this sextortion email has a subject line of “Waiting for the payment”. Naturally, this would immediately pique your curiosity, and you would open it. Once the email is opened, you would be greeted with a threatening email that demands money.

The email itself is written in broken English with numerous grammar/spelling mistakes. The sender proceeds to explain that they have been watching you cheat on your partner, and while “it’s not my business, but i could make you loose everything if you fail to follow my instructions”. The sender demands that you pay $280 to the provided Bitcoin wallet address. The video will supposedly be deleted once the payment goes through. But this email appears to be missing some parts that are usually found in other sextortion emails. The sender does not properly explain what exactly they are using to blackmail you, only mentions a video of something near the end. The email also does not explain what the video is or how the sender was able to get it. In other sextortion emails, senders usually claim to have installed malware on victims’ devices and taken videos via the webcam of them watching pornography. But in this case, you’re supposed to assume that the video shows you cheating on your partner because it’s not explained properly by the sender.

If it hasn’t been made clear yet, this email is nothing more than a sextortion scam and none of the claims are legitimate. There is no video, and you don’t need to pay anything. This is a very low-effort extortion attempt but it’s still one of the more believable attempts. You may come across other extortion emails claiming that an assassination hit has been ordered on you, or that a bomb has been placed at your place of work. One of the more recent extortion campaigns threatened to infect users and their families with COVID-19 if they do not agree to pay. Generally, these emails do not trick many victims, judging from the money amounts transferred to the wallet addresses. But since these scams are still around, they probably make scammers enough money to continue these malicious activities. Fortunately, these emails are very low-effort, which makes them very obvious.

If you receive a threatening email asking for bitcoin, you can usually safely ignore it. Simply remove “I have been watching you” sextortion email from your inbox. Unfortunately, if you have already transferred the Bitcoin to the account, you will not be able to get it back. Though it does not appear that any transactions have been made to the provided wallet address in this particular sextortion email.

Generally, sextortion scam emails claim that users receive these emails because their email addresses and computers have been hacked. However, as we’ve already established, none of the claims in the email are true. The reason you received a sextortion scam email is that your email address has been leaked by some service you used it on. You can check which breach your email address is part of on HaveIBeenPwned. Unfortunately, if you received one sextortion email, you’ll likely receive more in the future. And not only sextortion, but you may also receive emails carrying malware. Thus, you need to very careful with unsolicited emails.

If you receive an email threatening to expose a video of you, your initial reaction may be to panic. If the email contains a password you actually use or have used in the past, you may panic even more. However, there is a perfectly logical explanation for why the sender has your password, and it has nothing to do with your computer having malware or the sender watching you. In reality, the reason your password is there is because it was leaked. Or the service you use/used the password for had poor security and was breached by malicious actors. Either way, your password, along with the email address, ended up in a database that also has thousands of other users’ login credentials. These credentials are usually sold on hacker forums and bought by scammers/malicious actors for purposes of sending scam emails and distributing malware. You can check whether your password has even been leaked here. It goes without saying that if your password appears in a sextortion email or has been leaked, you need to change it immediately for all accounts you use it for. And keep in mind that you should never reuse the same password. All passwords for accounts you do not wish to lose should have unique, strong passwords.

What to do when you receive a sextortion email?

While receiving a sextortion email with threats to expose a private video of you may alarm you a great deal, there is nothing to worry about. The video does not exist, you were not watched by the sender, and there is no malware on your computer. You can safely remove “I have been watching you” sextortion email from your inbox and forget about the whole thing.