What is “Unfortunately, there are some bad news for you” email scam

What is “Unfortunately, there are some bad news for you” email scam

“Unfortunately, there are some bad news for you” email scam is a generic sextortion email campaign that threatens to release a private video of you watching pornography if you do not agree to pay $1750 in Bitcoin. It’s a very typical sextortion scam that follows a particular pattern and there’s nothing unique about it. It goes without saying that your device has not been hacked, nor is there any kind of video of you watching adult content. You can completely disregard this scam and delete the email from your inbox. 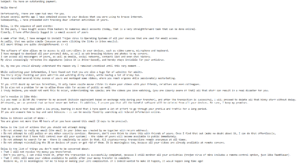 Sextortion scam emails have been on a rise recently, with new campaigns appearing on a regular basis. Despite likely being sent by different scammer groups, they all follow a similar pattern, therefore look more or less identical. They first try to attract users’ attention with threatening lines. In this case, it’s “You have an outstanding payment” and “Unfortunately, there are some bad news for you”. Other campaigns start with “If you want us to be silent, read“, “Please dont make an even more fool of yourself”, “Read before your buddies will see the other side of you”, “I am sorry to inform you but your device was hacked“, etc. The emails themselves are written in a very threatening manner to make users nervous, even if they initially do not believe the contents.

This sextortion scam email is written in broken English, though that is nothing unusual as it’s a common characteristic. After catching your attention with threatening lines, the scammer proceeds to explain that your email account and computer have been hacked after you clicked on a malicious link that downloaded a trojan onto your device. The trojan supposedly gave the scammer complete access to your computer, including your microphone, webcam, files, personal data, etc. According to the email, when you visited an adult website, the supposed hacker was able to film you watching a video. They then claim to have made a split-screen video of you watching the video as well as the video itself. The scammer also claims to have stolen all contacts and threatens to send the video to all of them if you do not agree to transfer $1750 in Bitcoin to one of the provided wallet addresses. The scammer gives 48 to make the transfer. It goes without saying that this is nothing more than a generic scam and there is no need to pay anything because there is no video.

These types of email scam campaigns come in various forms. The sextortion emails are some of the more believable attempts to scam users. Some of the more ridiculous ones include scammers claiming that an assassination hit has been ordered on the user and will be carried out if a payment is not made. Another campaign claims that a bomb has been placed at a user’s place of work and will be detonated if money is not transferred. More recently, there have been coronavirus-themed emails in which senders threaten to infect users and their whole families with the coronavirus. Evidently, these sextortion scam campaigns are more believable than the other versions. The fact that all wallet addresses displayed in this particular sextortion email have transfers made to them only proves that some users do fall for this. A couple of wallets have sums like $15,000 and $21,000 transferred to them, indicating quite a few users have fallen for this.

These kinds of emails can generally be safely ignored. In fact, you should just remove “Unfortunately, there are some bad news for you” email scam from your inbox. If you are worried about the contents, do not be. None of the claims are true, there is no malware on your computer, nor is there any video.

Why did this sextortion scam land in your inbox?

All sextortion scam emails claim that users receive the emails because their email accounts and computers have been hacked. However, no matter how convincing it may sound, it’s simply not true. In reality, scammers purchase thousands of email addresses from hacker forums and then use them to launch their spam campaigns. If you’re wondering how your email address ended up in the hands of scammers, it was leaked by some service you used. Haveibeenpwned is a good source to check whether your email address has ever been leaked. Unfortunately, if you receive one sextortion scam email, you’ll likely receive more in the future. However, the emails are generally harmless. Now that you know what they look like, you should be able to recognize them for what they are.

Some sextortion scams go a step further and reveal users’ actual passwords to make the emails appear more legitimate. Some users, already panicked about the email, may see their passwords and believe the contents. Because how else would the scammer have the password if not because they hacked the computer. The reality is actually quite different. These scammers have passwords for the same reason they have users’ email addresses, data breaches. If the displayed password is unique and only used for one of your accounts, know that the service for which you used the password has been hacked. Just like email addresses, these passwords are bought from hacker forums in bulk.

If you receive a sextortion email and it contains a password you use, change the password immediately. Make sure the password is strong and unique. Passwords should never be reused more than once because if it’s leaked by one service, hackers would be able to access your other accounts with the same password.

“Unfortunately, there are some bad news for you” email scam removal

If you find this or a similar sextortion scam email in your inbox, just remove it. You can ignore whatever the email is saying because it’s nothing more than a scam. Your device has not been hacked, nor is there a video of you watching pornography. The only thing you should do is change your password if it was revealed in the email.