How to delete Bbbw ransomware

How to delete Bbbw ransomware

Bbbw ransomware is yet another Djvu/STOP ransomware version, adding to the hundreds of ransomware released by the cybercriminals operating Djvu. The cybercrime gang releases new versions on a regular basis, sometimes even every other day. They’re more or less similar to one another but you can differentiate them by the extensions they add to encrypted files. This particular one adds .bbbw. So if you cannot open your files and they have this extension added to them, you’re dealing with Bbbw ransomware. You will not be able to decrypt encrypted files unless you can acquire the decryptor. You will not, unfortunately, be able to get it for free at the moment, as cybercriminals will try to sell it to you for $980. 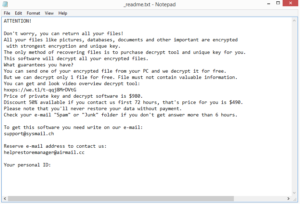 The Djvu/STOP cybercrime gang is notorious for releasing ransomware on a regular basis. Some of the more recent ones include Bbbw, Maiv, Qqqe, Yoqs, and Qqqw. All ransomware, including the ones from the Djvu family, targets personal files. That includes all photos, images, documents, videos, etc., essentially all files that users would be most upset about losing. You can recognize which files have been encrypted by the extension added to them. The extension also allows you to recognize which ransomware, in particular, you are dealing with. Files encrypted with Bbbw ransomware will have .bbbw added to them. For example, a text.txt file would become text.txt.bbbw. You probably already noticed that you cannot open these files unless you first decrypt them. But decrypting files requires a special decryptor. Though getting the decryptor is no easy task.

The process of getting the decryption tool is explained in a ransom note (_readme.txt) that is dropped in all folders that contain ransomware. The note is the same one dropped by all ransomware from the Djvu family. It explains how you can get the decryptor. According to the note, if you pay the $980 ransom, you would be sent the decryptor. The note also mentions that there is a 50% discount for victims who make contact with the malware operators within the first 72 hours. While it’s understandable that many users simply have no other option but to pay the ransom, giving in to the demands is very risky. The people operating this ransomware are cybercriminals, and by paying the ransom, you would be trusting the cybercriminals to keep their end of the deal. And that doesn’t always work out. Unfortunately, many victims in the past have not received their decryptors despite paying. So while whether to pay the ransom is your decision, you need to be aware of the risks that come with engaging with cybercriminals.

If you do not have a backup, back up your encrypted files in case a free Bbbw ransomware decryptor is ever released. You will not be able to find a decryptor at this moment, but that may change in the future. Because Djvu/STOP ransomware versions use online keys to encrypt files, malware specialists who often help victims cannot develop a decryptor. When ransomware uses online keys for file encryption, the keys are unique to each user. Unless those keys are released by the cybercriminals themselves (or by law enforcement if they catch the malicious actors), developing a decryptor will be difficult. However, it’s not completely impossible that these keys will eventually be released. So back up your encrypted files and check NoMoreRansom for a decryptor.

For users with bad browsing habits, it’s very easy to pick up malware. Developing better habits can help avoid many malicious infections. Good habits include not opening unsolicited email attachments without double-checking them, not clicking on ads when browsing unsafe sites, not torrenting copyrighted content, etc.

It’s very common to find malware in torrents. It’s no secret that a lot of torrent sites are poorly moderated and allow a lot of questionable torrents to be uploaded. Unsuspecting users who do not know the signs of malicious torrents can end up with all kinds of malware. It’s especially common to find malware in torrents for popular movies, TV series, video games, software, etc. We strongly recommend not torrenting copyrighted content because it’s not only stealing but also dangerous for the computer.

It’s also very common to find malware in emails. It’s a relatively low-effort malware distribution method for cybercriminals. A lot of malicious actors use this method to distribute all kinds of malware, which is why it’s very important that you are careful when opening unsolicited emails with attachments. It’s enough to open a malicious attachment for the malware to initiate. Fortunately for users, it’s often quite easy to recognize malicious emails. They are usually full of grammar mistakes, are sent from random-looking email addresses, address users with generic terms (User, Member, Customer), and contain unsolicited attachments. Senders of these emails usually pretend to be from legitimate companies but the emails don’t actually look legitimate so it’s rather easy to tell.

Occasionally, when malicious actors target someone in particular or a specific group of people, malspam attempts can be more sophisticated. It’s recommended to scan all unsolicited email attachments with anti-virus software or VirusTotal before opening them. This will allow you to avoid more sophisticated malicious spam.

Because ransomware is a very complex malware infection, you should not attempt to delete Bbbw ransomware manually. Unless you know exactly what to do, you could accidentally cause additional damage. Furthermore, if you don’t fully remove Bbbw ransomware/all of its components and try to access your backup, backed-up files may become encrypted as well. To avoid this, make sure to use reliable anti-malware software. Once you are sure that the ransomware is fully gone, you can safely start file recovery.