How to delete Dfwe ransomware

How to delete Dfwe ransomware

Dfwe ransomware is malware that encrypts files. This ransomware is essentially another version of the notorious Djvu/STOP file-encrypting malware. The cybercriminals operating this ransomware release new versions on a regular basis, though most of them are more or less the same. The versions can be differentiated by the extensions added to encrypted files. In this particular case, encrypted personal files will have .dfwe added to them. If you have a backup of your files, you will be able to recover your files quite easily. However, if you don’t have a backup, it will be much more difficult to recover files. One option is to acquire the Dfwe ransomware decryptor but the only people who have it are the malicious actors operating this ransomware. They will try to sell it to you but buying the decryptor comes with risks. 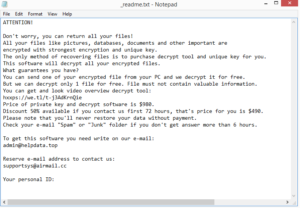 Dfwe ransomware is a generic ransomware infection, mostly identical to Ifla, Errz, Kruu, Xcvf, Sijr. They all target personal files, including photos, videos, documents, images, etc. All encrypted files will have extensions added to them, in this case, .dfwe. For example, an encrypted text.txt would become text.txt.dfwe. You will not be able to open any encrypted files unless you first decrypt them. A special decryptor is necessary for this but acquiring it will prove to be difficult because the only people who have it are the cybercriminals operating this ransomware. And considering their main purpose is to extort money from victims, they’re not going to just give you the decryptor.

When the ransomware is done encrypting your files, it will drop a _readme.txt ransom note. The ransom note is quite generic but it does explain how to acquire the decryptor. According to the note, victims can buy the decryptor for $980, though there’s supposedly a 50% discount for victims who make contact with the cybercriminals within the first 72 hours. Whether there actually is a discount is debatable, and paying the ransom, in general, is not a good idea. You need to keep in mind that you are dealing with cybercriminals, and you are not guaranteed a decryptor. There is nothing stopping cybercriminals from simply taking your money because they’re unlikely to feel obligated to help you. There have been many victims in the past who did not receive their decryptors despite paying the ransom. While the decision is yours, you need to be aware of the risks.

If you have a backup, you will have no issues with file recovery. However, it’s essential that you first fully remove Dfwe ransomware from your computer. Make sure to use a reliable anti-malware program to do this. Do not attempt to delete Dfwe ransomware manually because you could end up accidentally causing additional damage to your device. Once the ransomware has been removed completely, you can access your backup to start the file recovery process.

If there’s no backup available, recovering files will be more difficult. The only option is to wait for a free Dfwe ransomware decryptor to be released. You will not be able to find one at the moment but it’s not impossible that it will become available at some point. Because Dfwe ransomware uses online encryption keys, developing a free decryptor is difficult for malware researchers. The keys are unique to each victim, and unless those keys are released by the cybercriminals themselves, a free Dfwe ransomware decryptor is unlikely. Nonetheless, back up your encrypted files and wait if you have no other options.

How is ransomware distributed?

Ransomware targeting regular users is often distributed via torrents, malicious emails, ads on high-risk websites, etc. Users with bad online habits have a much higher chance of picking up malware infections because they’re more likely to do something risky while online. If users take the time to develop better browsing habits, they would significantly reduce the chances of picking up malware.

Torrent websites are often poorly regulated, which allows malicious actors to upload torrents with malware in them. The torrents may also stay up for a while, infecting potentially thousands of users before they’re taken down. It’s especially common to find malware in torrents for popular movies, TV series, video games, software, etc. We strongly discourage users from torrenting copyrighted content because it’s not only stealing but also dangerous for the computer.

Malware is also often distributed via email attachments. When users open malicious email attachments, their computers become infected with whatever malware was downloaded. Fortunately for users, the emails are fairly obvious most of the time. Senders often claim to be from known companies whose services users supposedly use in order to trick users into opening the attachments. But these spam campaigns are not very effective because the emails are often full of obvious grammar/spelling mistakes. When legitimate companies send emails to their customers, the emails do not have any mistakes because they would look unprofessional. But for whatever reason, malicious emails are often full of them. Malicious senders also address users with generic words like User, Member, Customer, etc., when a real email would have used a user’s full name. While most email spam is very obvious, there are some more sophisticated attempts. This is why it’s a good idea to scan all email attachments with anti-virus software or VirusTotal before opening them.

Ransomware is a very complex malware infection so it’s recommended to use a professional anti-malware to delete Dfwe ransomware from your computer. If you try to do it manually, you could end up causing additional damage to your computer. It’s also possible that you would miss some components, which could later allow the ransomware to recover. If that were to happen while you were connected to backup, backed-up files would become encrypted as well. The easiest and safest solution is to use anti-malware software. Once the ransomware is fully gone from your computer, you can safely connect to your backup and start recovering files. If you don’t have a backup, your only option is to wait for a free Dfwe ransomware decryptor to become available. It’s not currently available but it may be released in the future. But you should be very careful when looking for decryptors because there are many fake ones. NoMoreRansom is one of the safest places to get decryptors from.