How to remove Sijr ransomware

How to remove Sijr ransomware

Sijr ransomware is yet another generic ransomware infection from the Djvu/STOP ransomware family. It’s file-encrypting malware that will encrypt your personal files and demand that you pay for their decryption. Because it’s not always possible to recover encrypted files, this ransomware is considered to be a very serious malware infection. The cybercriminals operating this ransomware release new versions regularly, often at least a couple of times a week. The versions are more or less identical to one another but they can be differentiated by the extensions they add to encrypted files. This particular malware adds .sijr. Unfortunately, you will not be able to open any files that have this extension, unless you first use a special decryptor. But acquiring the decryptor will be difficult because the only people who currently have it are the cybercriminals behind this malware. 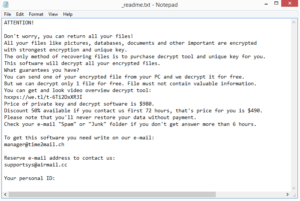 The ransomware will start encrypting your files the moment it’s initiated. While it does so, it will show a fake Windows update window, presumably to distract victims from what’s happening. It will target all personal files, including photos, videos, video games, images, software, etc., essentially everything that users would be willing to pay for. The files will have .sijr added to them. For example, text.txt would become text.txt.sijr. The ransomware will also drop _readme.txt ransom notes in all folders that have encrypted files. The note explains how victims can acquire decryptors necessary for file decryption.

The cybercriminals operating this ransomware want victims to pay $980 for a decryptor. The note does mention that there is a 50% discount to users who contact them within the first 72 hours but trusting the cybercriminals is risky. The biggest reason why paying the ransom is not recommended is that trusting cybercriminals is dangerous. There is nothing preventing them from simply taking your money and not sending anything in return. It has happened many times in the past to countless victims. Furthermore, the money you pay would go towards future criminal activities. Whether to pay or not is your decision but you need to be aware of the risks.

If you have backed up your files prior to file encryption, do not connect to your backup while ransomware is still present. Use anti-malware software to remove Sijr ransomware from your computer, and only when it’s fully gone should you access your backup.

Your options for file recovery are very limited if you do not have a backup. You can try to wait for a free Sijr ransomware decryptor to become available but it’s not even certain whether one will be released. Because this malware uses online keys to encrypt files, the keys are unique to each user. That means the keys are different for each user. Unless those keys are released by the cybercriminals themselves (or by law enforcement), a free decryptor is not very likely. Nonetheless, you should back up your encrypted files and occasionally look for a free Sijr ransomware decryptor. However, you should be very careful when searching for free decryptors because there are many fake ones, downloading which could lead to additional malware infections.

How does ransomware spread?

It’s common knowledge that if you have bad online habits, you are much more likely to infect your computer with malware. It’s mostly because users with bad online habits usually engage in more risky online behavior. We strongly recommend taking the time to develop better browsing habits, as well as becoming more familiar with malware distribution methods.

You can often find malware in torrents, and it’s one of the most widely-used malware distribution methods. Plenty of torrent websites are quite poorly moderated, and this allows malicious actors to upload torrents with malware in them. It’s especially common to find malware in torrents for popular movies, TV series, video games, software, etc. The more popular something is, the more likely its torrents are to contain malware. We strongly suggest you avoid pirating using torrents because it’s not only essentially stealing content but it’s also dangerous for the computer.

But it’s also very common to encounter malware in email attachments. The method is rather low-effort, which is why it’s popular among cybercriminals. Malicious actors buy email addresses from various hacker forums and spam those addresses with emails that have malware in them. The emails themselves are not dangerous as long as the attached file remains unopened. The moment users open the malicious file, the malware can initiate. Fortunately, users should be able to identify malicious emails fairly easily. Malicious senders usually claim to be from legitimate companies whose services users use. But the emails are full of grammar/spelling mistakes, which immediately give them away. Mistakes in official correspondence look unprofessional so companies will certainly do their best to avoid them. But because quite a lot of malicious actors are not native English speakers, their emails are often full of mistakes. Another thing that can give a malicious email away is you being addressed with generic terms (User, Customer, Member, etc.) when your name should be used. For example, if a company whose services you use sends you an email, you will always be addressed by your name.

But it’s worth mentioning that some malicious emails can be more sophisticated, particularly if cybercriminals have access to certain personal information. It’s highly recommended to scan all email attachments with anti-virus software or VirusTotal before opening them.

We don’t recommend trying to remove Sijr ransomware manually because it’s a very serious malware infection. Manually trying to delete it could lead to further damage to the computer. You may also miss parts of the ransomware, which could later allow the malware to recover. And if the ransomware was to recover while you were connected to your backup, the backed-up files would become encrypted as well. It is much easier, not to mention safer, to use an anti-malware program.

Once you fully delete Sijr ransomware from your computer, you can safely connect to your backup and start recovering files. If you do not have a backup, back up the encrypted files and wait for a free Sijr ransomware decryptor to become available. You can NoMoreRansom for free decryptors.