How to delete Hhqa ransomware

How to delete Hhqa ransomware

Hhqa ransomware is file-encrypting malware from the Djvu/STOP ransomware family. This gang of cybercriminals has released hundreds of ransomware versions and continues to release them on a regular basis, with Hhqa ransomware being the most recent version. The versions are essentially identical and can be differentiated by the extensions they add to encrypted files. This ransomware adds .hhqa. Unfortunately, this version is currently not decryptable for free. 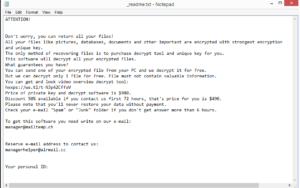 The Djvu/STOP ransomware gang releases new ransomware versions regularly, and Hhqa ransomware is the most recent one at the time of writing. Other versions we have written about are Ufwj, Moqs, and Gujd. They’re more or less identical, with even the ransom notes being the same. If you’re dealing with Hhqa ransomware, files will have .hhqa added to them. For example, image.jpg would become image.jpg.hhqa. You will not be able to open any files that have that extension because they’re been encrypted. The malware mainly targets personal files, including photos, videos, documents, images, etc. The only way to open those files is to first run them through a decryption program. Unfortunately, the only ones with a working decryptor are the cybercriminals operating this ransomware.

Once the ransomware has finished encrypting files, it will drop a _readme.txt ransom note in all folders that contain encrypted files. The note is very generic and is essentially identical to all other notes dropped by other Djvy versions. The note explains that files have been encrypted and that recovering them is possible if you pay the ransom. The requested ransom is $980, or $490 if you contact them within the first 72 hours. manager@mailtemp.ch and managerhelper@airmail.cc are the contact email addresses provided in the ransom note. While it may initially seem like a good idea, paying the ransom is not recommended. You should keep in mind that these are cybercriminals you’re dealing with, and there are no guarantees that you will be sent a decryptor even after paying. Plenty of users in the past have not received decryptors despite paying the ransom. But in the end, whether you pay the ransom is your decision.

If you have a backup of your files, you can access it to start recovering files as soon as you remove Hhqa ransomware from the computer. Make sure that the ransomware is completely gone before you access the backup because otherwise, your files in the backup would become encrypted as well.

For users who haven’t backed up files, the only option left may be to wait for malware researchers to release a free decryptor. Sofware developer Emsisoft does have a free Djvu/STOP decryptor but it only works on files encrypted with older versions that used offline keys for file encryption. Because versions like Hhqa ransomware use online keys, the keys are different for each victim., making it impossible to develop a decryptor that would work for everyone without those keys. However, all hope is not lost so you should back up encrypted files and check NoMoreRansom for a decryptor from time to time.

Malware infections like ransomware use a variety of different installation methods, including spam email attachments, fake downloads and updates, and torrents. Users with bad browsing habits are much more likely to pick up some kind of malware infection. We strongly recommend you familiarize yourself with the distribution methods and develop better habits to prevent future infections.

Spam email attachments, also known as malspam, are one of the most common ways users pick up malware infections. Malspam emails are sent to users whose email addresses have been leaked or part of a breach, as they’re purchased by malicious actors from hacker forums. Fortunately for users, unless they are targeted specifically, the malicious emails will be quite generic and easily recognizable. First of all, senders of malspam emails usually pretend to be from known companies and claim to be contacting users with important matters, which involve opening the attached files. Such emails will usually address users with generic words like User, Member, Customer, etc., instead of using names. If a company was contacting its customer in an official capacity, it would use the customer’s name instead of generic words when addressing them. Another sign of a potentially malicious email is grammar and spelling mistakes, as well as strong pressure to open the attached file. Lastly, when dealing with unsolicited emails with attachments, it’s recommended to always scan them with anti-virus software or VirusTotal before opening them.

Torrents are also often used for malware distribution. Torrent sites are quite badly regulated, which allows malicious actors to easily upload malware disguised as movies, episodes of TV shows, video games, and software. In particular, if something is very popular, torrents for it will most likely contain all kinds of malware. For example, when the popular fantasy series Game of Thrones was airing, torrents for episodes often contained malware. This is one of the reasons why pirating is not a good idea, the other reason being that it’s essentially stealing content.

Finally, you should be very careful with sources from which you download programs and updates. High-risk websites often show fake malware and update alerts, and downloading whatever they offer could lead to serious malware infections. It’s best to download programs from their official websites. The same goes for program updates.

Because ransomware is a complex malware infection, it’s not recommended to try to remove Hhqa ransomware manually. Not only is it possible for you to miss something that could later allow the ransomware to recover, but you could also end up causing even more damage. Instead, you should use a reliable anti-virus program. Hhqa ransomware is from a known malware family so it’s detected by the majority of security programs. Once you delete Hhqa ransomware, you can connect to your backup to start recovering files. However, make sure the ransomware is removed completely before you access your backup because otherwise, the backed up files would become encrypted as well.

We should mention that unfortunately, Hhqa ransomware removal does not mean files will be automatically decrypted. A decryptor is necessary for that. If you don’t have any other options, back up the encrypted files and occasionally check NoMoreRansom for a free decryptor. While it’s not currently available, it may be released sometime in the future.