How to delete Shgv ransomware

How to delete Shgv ransomware

Shgv ransomware is part of the Djvu/STOP family of file-encrypting malware. If your files have the .shgv file extension added to them, your computer is infected with the Shgv ransomware. Because it encrypts files and essentially takes them for hostage, it’s a very dangerous computer infection. Unfortunately, you will be unable to open any of the encrypted files unless you first run them through a decryptor. But the only people who have the decryptor are the cybercriminals operating this ransomware. 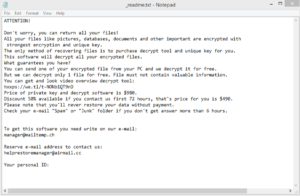 Shgv ransomware comes from the same malware family as Yqjs, Mljx, Hgsh, Yqal, and many other versions. They’re all practically the same ransomware. The versions can be differentiated by the extensions they add to encrypted files. This one adds .shgv, hence why it’s known as Shgv ransomware. The ransomware, like most infections of this type, will target all personal files, including photos, videos, images, documents, etc. For example, image.jpg would become image.jpg.shgv. None of the files with this extension will be openable unless you first run them through a decryptor.

When the ransomware is initiated, it will display a fake Windows update window while encrypting files. Once the process is done, you will notice a _readme.txt ransom note in all folders that contain encrypted files. The note says that the only way to decrypt files is to use a decryptor. Unfortunately, that, at this moment, is correct. The cybercrooks operating this ransomware will offer the decryptor for $980. There supposedly is a 50% discount to those who make contact within the first 72 hours but whether that is true is questionable. We should also mention that paying will not necessarily lead to a decryptor. The people with the decryptor are cybercriminals, and what’s there to stop them from simply taking your money and not sending the decryptor. Ultimately, whether to pay or not is your decision to make. However, you should be aware of the risks involved. It’s also worth mentioning that the reason ransomware remains such a big threat is that victims pay the ransom. Once cybercriminals stop making money from this particular malicious activity, they will switch to something else.

Unfortunately for those without a backup, it’s currently not possible to decrypt files for free. If you decide to not pay the ransom, your only option is to back up encrypted files and wait for a free decryptor. The issue with developing a free decryptor is that Shgv ransomware uses online keys to encrypt files. That means that each victim has a unique key, without which it’s not possible to decrypt files. Unless those keys are released by the cybercriminals themselves or anyone who has access to them, a decryptor will not be available. However, it’s not impossible that it will be released sometime in the future. We should also note that there is a free Djvu/STOP decryptor developed by Emsisoft but it will not work on Shgv ransomware or any other more recent Djvu/STOP version.

Only begin file recovery after you fully remove Shgv ransomware from the computer. Make sure to use anti-malware software. If the ransomware is present when you connect to your backup, the files in the backup would become encrypted as well.

One of the most common ways malicious actors spread malware is via malicious emails. More specifically, malicious actors add malware to emails as email attachments. When users open those attachments, they permit the malware to initiate. Fortunately for users, these emails target a large number of users and not anyone specific. This means that the emails are very generic, thus easily recognizable for what they are. Most notably, generic emails carrying malware are often full of grammar and spelling mistakes. Senders usually pretend to be from legitimate companies whose services users use so the mistakes are very obvious. In legitimate emails, mistakes are seen as unprofessional so senders will try to avoid them as best as possible. But for whatever reason, generic malicious emails are often full of mistakes. Another sign that an email may be malicious is when companies who should know your name address you as “User”, “Member”, “Customer”, etc. For example, if you use Netflix, all their emails to you will include your name. Thus, generic greetings when a company should be using your name are regarded as suspicious.

It’s generally a good idea to scan all unsolicited email attachments with anti-virus software or VirusTotal to make sure that there is no malware in them. Some malspam campaigns can be more sophisticated when the target is someone specific. If malicious actors have certain information on their target, making a convincing malicious email is not particularly difficult. So to protect yourself from targeted attacks, always scan email attachments.

Using torrents to pirate copyrighted content can often lead to malware infections. Torrent sites are quite badly moderated which allows cybercriminals to easily upload torrents with malware in them. It’s very common to find malware in torrents for movies, video games, TV shows, software, etc. In particular, recently-released movie torrents usually have malware in them. For example, new Marvel movie torrents are generally full of malware. So when you download copyrighted content using torrents, you’re not only stealing but also endangering your computer and data.

If you do not have a backup, your only option is to back up encrypted files and wait for a free decryptor to become available. However, we should warn you that there are a lot of fake decryptors on various questionable forums. If you cannot find a decryptor on a reliable site like NoMoreRansom, the decryptors on those forums are unlikely to be legitimate. Instead, you’d probably end up with even more malware.