How to delete Orkf ransomware

How to delete Orkf ransomware

Orkf ransomware is a generic Djvu/STOP ransomware variant that encrypts files and demands a payment to decrypt them. The ransomware comes from a gang of cybercriminals who have released hundreds of essentially identical ransomware infections. The different versions can be differentiated by the extensions that are added to encrypted files. In this particular case, the ransomware adds .orkf. It also drops the usual _readme.txt ransom note that demands $980 for a decryptor. 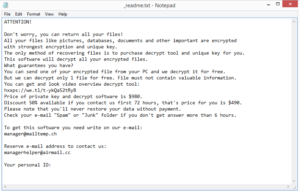 The Djvu/STOP has released hundreds of similar ransomware versions, including Hoop, Muuq, Nooa, and Hhqa. They are all more or less identical but can be differentiated by the extensions they add to encrypted files. This version adds .orkf. For example, image.jpg would become image.jpg.orkf. As you’ve likely already noticed, you cannot open these files unless you first run them through a decryptor. Unfortunately, the only ones with a working decryptor are the people operating this ransomware. There is the option of buying it from them, as explained in the _readme.txt ransom note that gets dropped in all folders that contain encrypted files. As explained in the ransom note, the price for the decryptor is $980, though it does mention a 50% discount if you make contact within the first 72 hours.

While it may seem like a tempting option, paying is not recommended. In the end, the decision is yours but we feel it’s necessary to warn you that you will not necessarily get the decryptor just because you pay. Remember that you are dealing with cyber crooks, which means they are unlikely to feel any kind of obligation to help you. Unfortunately, many users have not received decryptors in the past, even after paying. Furthermore, as long as users pay, ransomware will continue to be an issue.

If you have a backup, recovering files shouldn’t be an issue. However, you need to make sure that you fully remove Orkf ransomware from your computer. If you access your backup while the ransomware is still infecting your device, files in the backup will become encrypted as well. Do not attempt to remove the ransomware yourself and instead, use anti-malware software. This will ensure that the ransomware is fully deleted.

If you don’t have a backup of your files, there’s is little chance that you will be able to recover them. There is a free Djvu/STOP decryptor by Emsisoft but it will not work on most Djvu versions that have been released after 2019. More recent versions use online keys to encrypt files, which means that the keys are different for each victim. It’s impossible to create a working universal decryptor unless the keys are released. However, it’s not impossible that a free decryptor will eventually be released. The cybercriminals themselves may release the keys if they decide to discontinue their activities, or law enforcement agencies may eventually catch them and release a working decryptor. Thus, back up your encrypted files and wait for a decryptor if you are out of options. NoMoreRansom is a good source for decryptors.

How does ransomware infect a computer?

Having good browsing habits significantly decreases the chances of you picking up a malware infection. Ransomware and many other malware infections are distributed via malicious email attachments, torrents, malicious ads/updates/downloads, rootkits, etc. Thus, developing better habits such as not opening unsolicited email attachments is a good idea.

If you’re someone who pirates entertainment content via torrents, you’re likely to encounter malware quite often. Torrent sites are usually badly regulated, which cybercriminals take full advantage of by uploading loads of malware disguised as movies, TV series, video games, and software. It’s particularly common for torrents for something popular to contain malware. For example, when the fantasy TV series Game of Thrones was airing, a lot of torrents for episodes contained all kinds of malware. Pirating via torrents is not only frowned upon because it’s essentially stealing content but also because it’s dangerous for the computer.

Malspam is also one of the most common ways malware is distributed. Cybercriminals purchase leaked email addresses from hacker forums in large quantities and use them to launch spam campaigns that spread malware. The emails are often made to appear like they’re sent from some company whose services users use and use threatening language to pressure users into opening the attached files. Fortunately, in most cases, malspam is very obvious and low-effort because it’s targeting users in general. If someone is a specific target, the malspam may be much more sophisticated. But in general, it’s not difficult to tell which emails are malicious as long as you know what to look for. One of the most obvious signs is grammar and spelling mistakes, especially if the sender claims to be some known company or organization. Additionally, most malspam address users in User, Customer, Member, etc., because scammers do not know users’ names. If a company whose services you use sends you an email, it will always address you by your name and not a generic title. Finally, it’s a good idea to scan all unsolicited email attachments with anti-virus software or a service like VirusTotal before opening them to make sure they are safe.

Lastly, you need to be very careful when browsing websites that are considered to be high-risk. There are plenty of websites that have questionable ads on them, interacting with which could lead to a malware infection. It’s highly recommended that you have anti-virus software installed and an adblocker enabled whenever you visit sites that are not entirely safe,

Since this is a serious malware infection, we do not recommend you try to manually remove Orkf ransomware from your computer. Unless you are absolutely sure of what you are doing, you could end up causing additional damage by trying manual removal. Instead, use anti-virus software to delete Orkf ransomware from your computer. Once the malware is no longer present, you can access your backup to start file recovery. We should caution you that if the ransomware is still present when you access your backup, the files in the backup would become encrypted as well.

If you haven’t backed up your files, your options are, unfortunately, limited. At this moment, no free decryptor is available so you cannot recover files if you have no backup. However, it’s not impossible that it will be released sometime in the future. We recommend that you back up the encrypted files and check NoMoreRansom for a decryptor from time to time. But you need to be careful about where you download decryptors from as you could end up with malware if you try to get it from an unsafe source.