Muuq ransomware is a generic file-encrypting malware infection that comes from the Djvu/STOP ransomware family. The gang operating these ransomware infections has released hundreds of essentially identical threats, some of which we have previously written about. You can identify this particular ransomware by the .muuq extension added to encrypted files. Currently, files with that extension are undecryptable, though that may change in the future. 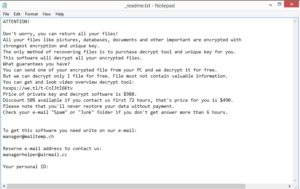 Muuq ransomware, along with file-encrypting malware like Nooa, Hhqa, Ufwj, and Moqs, comes from the same malware family Djvu/STOP. The group is notorious for releasing ransomware on a regular basis, with hundreds of ransomware released in only a couple of years. They are more or less the same, with only the file extension being different on the surface.

Muuq ransomware targets personal files, mainly photos, images, videos, and documents. File encryption will start as soon as the malware is initiated, and while files are being encrypted, the ransomware will show a fake Windows Update window to distract victims. You will immediately notice the .muuq extension added to all your personal files, and they will be unopenable. For example, image.jpg would become image.jpg.muuq. Unfortunately for victims, the files will remain unopenable until they are decrypted using a special decryption tool, which only the cyber crooks behind this ransomware have.

A ransom note _readme.txt will be dropped in all folders containing encrypted files. As can be seen in the above image, the ransomware operators are trying to sell the decryptor for $980. They also offer a 50% discount if victims contact them within the first 72 hours. manager@mailtemp.ch and managerhelper@airmail.cc are given as the contact email addresses. However, we strongly advise against paying the ransom or even contacting cybercriminals. You receiving a working decryptor is not a guarantee because there’s nothing obligating the cybercrooks to send it. Many users in the past have paid the ransom but not received the decryptor. Whether to pay or not is your decision but you do need to be aware of the risks.

File recovery shouldn’t be an issue if you have a backup. However, to avoid having your backed-up files encrypted as well, you need to make sure you remove Muuq ransomware fully before connecting to backup. If you don’t have a backup, your options are very limited. It is possible that a free decryptor will be released sometime in the future but that may be difficult because the ransomware uses online keys to encrypt files, meaning the key is different for each victim. Without those keys, developing a working decryptor is not very likely. There is a free Djvu/STOP decryptor available but it will not work on newer Djvu/STOP versions like Muuq ransomware. As explained by Emsisoft, files can be successfully decrypted if they were encrypted by an offline key that Emsisoft has. However, it’s not impossible for the keys to be eventually released, either by the cyber crooks themselves when they eventually close shop, or by law enforcement. So if you are out of options, back up encrypted files and wait for a decryptor to become available on NoMoreRansom.

How does ransomware spread

Users with good browsing habits have a much lower chance of picking up serious malware infections. Regular malware is usually distributed via spam email attachments, torrents, malicious ads/updates/downloads, rootkits, etc. Developing better browsing habits, such as not opening unsolicited email attachments, can go a long way towards avoiding malware. Take the time to familiarize yourself with how malware is distributed and avoiding it will become much easier.

One of the most common ways ransomware is distributed is via malspam campaigns. If your email address has been leaked or part of a data breach, it’s likely that you receive spam on a regular basis. Email addresses for these spam campaigns are purchased from hacking forums. The emails contain a malicious attachment, which if opened would initiate the malware. Fortunately, the majority of these emails are quite obvious. The only reason malspam would be more sophisticated is if you were targeted specifically and the cybercrooks had information about you. Otherwise, the emails will be sent from random email addresses, contain loads of grammar/spelling mistakes, and pressure you into opening the attachment by claiming it’s some kind of important document. The senders often claim to be from a company whose services you use to trick you into opening the attachment which is why you need to be careful even if you think you recognize the sender. Take note of how the email addresses you, whether your name is mentioned or if you’re addressed in User, Member, Customer, etc. If a company whose services you use sends you an official email, they will address you by your name, not by generic terms. Lastly, even if an email looks completely legitimate, we strongly recommend that you scan all unsolicited email attachments with anti-virus software or VirusTotal.

It’s also very easy to pick up a malware infection via torrents. If you regularly download copyrighted content via torrents, there is a high risk that you will encounter malware, if it hasn’t happened already. Torrent sites are quite badly regulated, which allows malicious actors to disguise malware as torrents for popular content. Torrents for movies, TV series, video games, software, etc., are often full of malware. So if the fact that pirating is essentially stealing content does not deter you from torrenting, maybe the threat of serious malware will.

Finally, avoid interacting with advertisements and other questionable content when on high-risk websites. Clicking on a seemingly harmless ad could lead you to a website that will try to trick you into downloading something. Make sure to install an adblocker program and avoid high-risk sites.

Ransomware isn’t an infection that’s easily removed manually, which is why it’s always recommended to use anti-malware software. If you attempt to remove Muuq ransomware manually, you may end up causing further damage. It’s also possible that you could miss something that could later allow the ransomware to recover. If you access your backup to recover your files while the ransomware is still present, those files would become encrypted as well. It’s safest to use anti-malware software as it would delete Muuq ransomware and all related files that could cause issues later on. Only when you are sure the ransomware is completely gone should you start recovering files from your backup.

Unfortunately, if you did not back up your files prior to the infection, your options are limited. It’s not impossible that a free decryptor will be released sometime in the future but it’s not a certainty. However, if it was released, it would appear on NoMoreRansom. We suggest you back up the encrypted files and occasionally check for a free decryptor.